The armed forces of Russia and Tajikistan used drones in their joint military drills near the Tajik capital of Dushanbe, an aide to the Central Military District’s commander, Col. Yaroslav Roshchupkin, said Monday.

He added that the drills were focused on developing a united approach to countering illegal armed groups and joint tactical operations.

In May, the Russian and Tajik armed forces also held drone drills in Tajikistan’s Pamir Mountains to practice using drones against illegal armed groups in areas of high altitude.On Friday, clashes between Tajik government forces and an armed gang in the capital of Dushanbe and in the city of Vahdat, located some six miles away, left over 30 police officers and nine gang members dead. 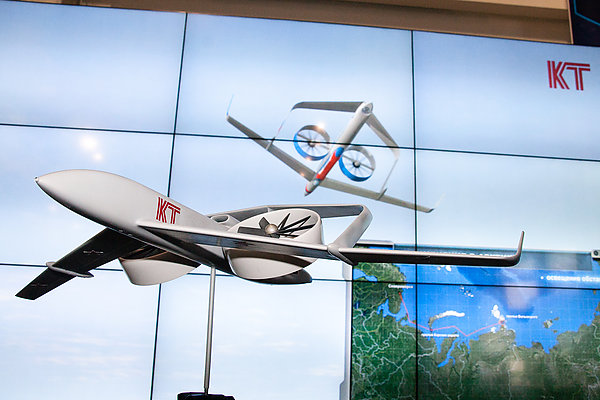 Kronshtadt Group held a presentation of advanced high-speed UAV Fregat, which does not require an airfield, at MAKS-2015 international airshow.

Kronshtadt Company (part of Kronshtadt Group) is starting development of Fregat UAV, which does not require an airfield. In accordance with the performance specification, Fregat will combine a vertical takeoff and landing capability with a good aircraft performance, which allows carrying out work in hard-to-reach regions having no airfield structure, the company explained.

The project will be implemented in several stages. At the first stage a flying model will be created in order to test major technical solutions. At the second stage a prototype powered by a production engine will be developed and tested. Depending on the results of the second stage, a decision on starting further research and development work will be made, the company added.

As the United States continues to mull Ukrainian requests for lethal aid, a US official has confirmed that the Pentagon will deliver a large fleet of unarmed drones and Humvees.

Speaking on condition of anonymity, an official told Reuters that the US is preparing a shipment of unmanned Raven drones. These UAV’s are nonlethal and can easily be launched by hand.

The package will also contain over 200 military Humvees, 30 of which will be heavily armored.

Also included will be an assortment of radios and counter mortar radars. The estimated value of the equipment is $75 million, though that estimate does not include the Humvees.

The aid could arrive in the Ukraine within weeks.

Kiev has long pushed for lethal assistance from the West. Last month, Advisor to the Minister of Internal Affairs of Ukraine Zorian Shkiryak expressed hope that a such aid could soon be delivered.

“The new US Defense Secretary Ashton Carter is a supporter of the idea of providing Ukraine with high-precision lethal defense weapons!” Shkiryak wrote on his Facebook page. “We invest high hopes in the new Pentagon leader.”

Last December, President Obama signed the Ukraine Freedom Support Act, authorizing the shipment of lethal assistance to Kiev, and several US lawmakers have encouraged the president to begin such deliveries.

After a meeting with German Chancellor Angela Merkel in February, Obama decided to delay these considerations. Merkel has been a strong proponent of finding a diplomatic, nonviolent solution to the Ukrainian crisis.

Obama agreed “to give some space for those diplomatic, political efforts that were underway” to secure a peaceful solution to the conflict, German Ambassador Peter Wittig told the Associated Press.

On Tuesday, the Ukrainian military also received a shipment of 20 Saxon armored vehicles from the UK. The Saxon’s are no longer used by the British military, and all lethal capabilities had been removed. Ukraine intends to rearm the vehicles before they are put into use.

A car accident caused by the delivery of the Saxons left one Ukrainian soldier dead on Tuesday.

Kiev is still expecting the delivery of another 55 Saxon vehicles.

The world’s first drone capable of hiding from missiles and committing “suicide” has been crafted in Iran.

According to The International Business Times, the new UAV can escape an enemy’s laser optics and infrared light systems at night. “Given the daily progress of drones as well as the increased missile power to destroy them, a missile-evading drone was designed and built for the first time in the world which can escape thermal and air-to-air missiles and no missile can approach the drone any closer than 250 meters,” states Hassan Akbari Layeq as quoted by FNA.Another feature that protects the drone from targeting is its flight altitude. The “Sarallah Drone” can rise as high as 8,000 meters, DefenseWorld.net says.

Moreover, thanks to a mounted safety system, the drone is able to land in a secure place should it face any problems during the flight. And if the conditions are hazardous, it can detonate itself to deprive a foe’s engineers from studying its technological secrets.The drone can accomplish a one hour-long flight at the speed of 160 km/h. However, the safety system limits the flight to 40 minutes, if activated.

Iran has been placing high emphasis on UAV development and has made several remarkable achievements. Its drones can move at supersonic speeds, carry air-to-surface missiles, accomplish surveillance, reconnaissance, offensive and defensive missions, and participate in environment monitoring operations, FNA conveys.

Britain’s first air strike by a Royal Air Force (RAF) Reaper drone was carried out over the weekend in Iraq, the Ministry of Defense (MoD) has confirmed.

The drone strike occurred as part of an international military operation in the region against the terror group, Islamic State (IS, formerly ISIS or ISIL). The aerial strike occurred near the strategic town of Baiji – home to Iraq’s most significant oil refinery.

ISIS militants were laying “improvised explosive devices” in the region, according to the MoD.

Approximately 40 nations worldwide have joined the US-led international coalition against ISIS. In a brutal and expansionist effort to establish a self-proclaimed ‘caliphate’, the militant group has annexed large parts of Syria and northern Iraq.

Britain’s first airstrikes were launched against militants on September 30. The British government also dispatched military officials to help train Iraqi forces on the ground in northern Iraq, to prevent the further advance of the terror group.

The MoD suggested, at the time, the drones would provide “additional intelligence, surveillance and reconnaissance support to the Iraqi government and coalition allies,” defend the states’ collective “national interests,” and thwart further ISIS attacks in the Middle East.

While the MoD refuses to confirm how many Reaper drones have been re-deployed from Afghanistan to Iraq, they are thought to have carried out at least a dozen operations in Iraq thus far.

Islamic State extremists are estimated to earn more than $3 million per day from oil sales, while also gleaning mammoth sums from human trafficking and extortion.

The British parliament voted last month to approve airstrikes against the Islamic State in Iraq, but is yet to approve extending the strikes into Syria.

RAF Tornado jets were deployed in tandem with Reaper drones near the Baiji oil refinery throughout the weekend. Although the town – located approximately 200km (130 miles) north of Baghdad – was captured by ISIS in June, the terror group failed to seize the refinery itself.

Under the contract, the US side suggests organizing two-week training courses for Ukrainian drone operators at Redstone Arsenal base in Alabama, US, a diplomatic source said

MOSCOW, November 7. /TASS/. The United States has offered to supply to Ukraine three RQ-11B Raven unmanned aircraft systems in a potential deal worth more than $3 million, a diplomatic source said on Friday.

“These drones can pinpoint the exact location of objects on the ground and designate targets for air strikes in real time,” the source told TASS. “If the deal goes through, the drones may be used in Ukraine’s south-east,” he added.

“Under the contract, the US side suggests organizing two-week training courses for Ukrainian drone operators at Redstone Arsenal base (Alabama, US),” the source added.

One Raven complex — aircraft and an applicable controlled station — would cost about $300,000, he said, but the whole contract might be valued at more than $3 million, as it included preparation of operators and aircraft maintenance in the United States.

The RQ-11B Raven unmanned aircraft system is a 4.5-pound hand-launched sensor platform that provides day and night, real-time video imagery wirelessly to a portable ground control station for ‘over the hill’ and ‘around the corner’ reconnaissance, surveillance and target acquisition in support of tactical units. The United States  use Raven systems extensively for missions such as base security, route reconnaissance, mission planning and force protection. Each Raven system typically consists of three aircraft, two ground control stations and spares.

TEHRAN, November 10. /TASS/. Iran carried out successful tests of a drone based on the US-made aircraft that was captured in 2011, the chief of the Revolutionary Guard’s airspace division, Gen. Amir Ali Hajizadeh, told the IRNA.

He said that the new drone is an Iranian version of the American RQ-170 Sentinel that was manufactured using Stealth-technology. According to the General, December 4, 2011 Iranian Air Defense forces managed to seize the aircraft and land it with minimum damage. The drone was carrying out intelligence collection flights 225 km from the border dividing Iran and Afghanistan.

RQ-179 Sentinel also known as “The Beast of Kandahar” was manufactured by the US company Lockheed Marteen and was one of the most guarded aerial vehicles in service of the American Air Force. The US had been using this aircraft in Afghanistan since 2007, however, refused to admit its existence till late 2009.

The exact technical characteristics of the UAV are still unknown. Only the information concerning special covering for the body of the aircraft that makes it impossible to detect by radars was confirmed. As estimated by Iran’s Ministry of Defense, the original US drone weighs from 3 to 3.6 tons.

There is information that the US was keeping track of Osama bin Laden, the leader of al-Qaeda, in Pakistan, where he was killed by US SEALs unit May 1, 2011.