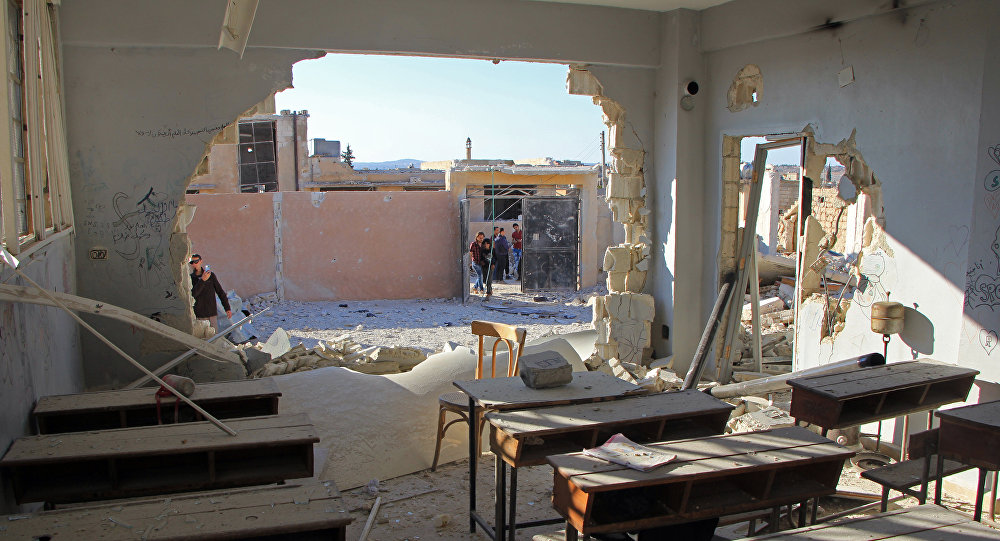 The police of the Syrian city of Aleppo confirmed Friday that a school in the city’s west was shelled, accusing militants of the attack.

On Thursday, Russian Defense Ministry spokesman Maj. Gen. Igor Konashenkov said that terrorists had shelled a school in the Hadaiq al Andalus region. Three children were killed, while more than 10 were hospitalized with heavy wounds, he added.

“There are no servicemen in this region, only schools. Despite this, terrorists struck exactly here while classes were underway. Innocent children died,” police chief Zuhir Said Aldin said, as broadcast on the Rossiya 1 television channel.

During the recent months, Aleppo has been a battlefield between government forces, jihadists, and numerous opposition groups. The fighting has also affected thousands of civilians in the embattled city.

The Chilcot report on the UK’s involvement in the 2003 US-led military operation against Iraq revealed the British Armed Forces were ill-prepared and ill-equipped for the campaign itself and the post-conflict phase, which is an embarrassment for the military and a huge disappointment for the Brits, analyst François-Bernard Huyghe told Sputnik.

The findings were unveiled on Wednesday following a seven-year inquiry.

“Surely, this is embarrassing for the British military that is believed to be one of the best in the world,” the analyst noted.

The report found that the UK Ministry of Defense  “was slow” in providing the equipment that the troops deployed to southern Iraq badly needed to maintain their safety. In his statement, Sir John Chilcot specifically mentioned the threat from improvised explosive devices that the agency failed to identify as serious.

In addition, the UK did not have enough resources to sustain two “enduring” campaigns, in Afghanistan and Iraq. The operation in Afghanistan was a priority. As a result, essential hardware, including helicopters and surveillance equipment, was not readily available for British troops deployed to Iraq.An ill-prepared and underequipped British force was compelled to make an agreement with its adversary, a powerful militia in Basra. “It was humiliating that the UK reached a position in which an agreement with a militia group which had been actively targeting UK forces was considered the best option available,” Sir Chilcot noted.

Needless to say, the British people could not have been happy about these findings.

“The Brits love their army. There is almost no anti-militarist sentiment in the country,” Huyghe, research director at the IRIS think tank, said. “This is a huge disappointment for [the people], at least when it comes to the army’s command and those responsible for planning.”

The inquiry, led by Sir John Chilcot, also found that then British Prime Minister Tony Blair made a decision to invade Iraq by exaggerating the threat that the country under Hussein posed to its neighbors and beyond at a time when all diplomatic means of resolving the issue had not been exhausted. In addition, the entire Iraq policy was based on flawed intelligence and assessments.

Over 50 mid-level US diplomats have signed a letter urging the United States to carry out military action against the government of Syrian President Bashar Assad.

The internal memo, a draft of which was obtained by The New York Times from a US State Department official on Thursday, calls for “a judicious use of stand-off and air weapons,” against Assad forces.

Syria has been mired in civil war since 2011, with government forces loyal to president Assad fighting a number of opposition factions and extremist groups.On February 27, a US-Russia brokered ceasefire came into force in Syria. Terrorist groups such as Islamic State (ISIL, also known as Daesh), as well as Jabhat al-Nusra (al-Nusra Front), both outlawed in Russia and a range of other states, are not part of the deal.

Russia recognizes Assad as the legitimate authority in Syria, stressing that the Syrian people should be free to choose their leadership without outside intervention. The United States and some of its allies have been supporting the so-called moderate Syrian opposition since the beginning of the conflict in Syria, urging Assad to resign.

In 2015, the Pentagon embarked on a failed $500 million mission to train and equip Syrian rebels. The failure of the 2015 program led the Pentagon to loosen requirements for Syrian rebels, opening the pool of recruits to leaders of armed groups that have sought to overthrow the Assad government.

The US-led anti-terrorist coalition’s airstrikes on the Syrian Army may not have been an accident and could be repeated, Russia’s envoy to the UN Vitaly Churkin said.

The Syrian Army confirmed earlier in December an airstrike on Syrian Army positions by US-led coali   tion aircraft in the Deir ez-Zor area that killed three and wounded 13 servicemen.

“This will intensify tensions and only complicate the situation in Syria. But let’s hope it won’t happen,” he added.

Churkin said that Moscow was not currently planning to raise the issue of coalition strikes on the Syrian army at the UN Security Council.

“At the moment we don’t have any such plans. As dramatic as the situation may be, this is a one-off instance for now,” Churkin said.

The Russian Defense Ministry said last week that at least four Western coalition warplanes were spotted over Deir ez-Zor in Syria on December 6, when a Syrian Army camp came under attack.The US-led international coalition has been carrying out an air campaign against the Islamic State (IS, or Daesh in Arabic) in Syria since fall 2014 without a permit from local authorities.

In September, Russia launched its own air operation against Daesh militants at the request of Syrian President Bashar Assad. Daesh is banned in Russia, as well as in the United States, the European Union and elsewhere around the world.