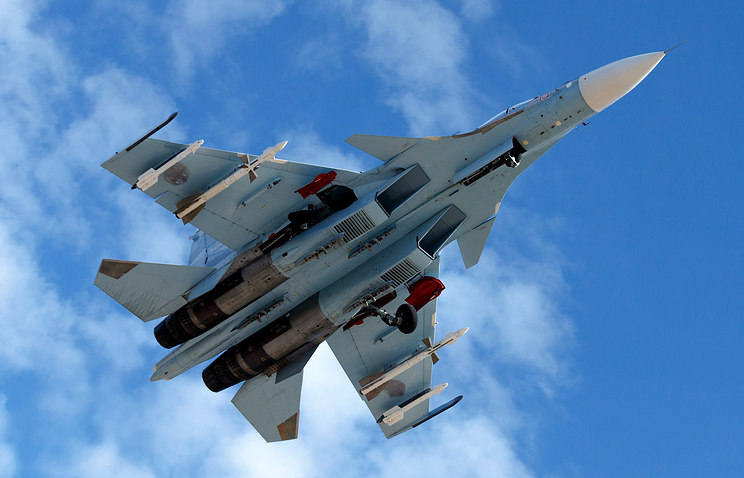 “We don’t need other long-range air defense systems, (in addition to the S-300 and Bavar-373), we no longer plan to purchase them. Therefore, the Iranian Defense Ministry’s agenda includes consultations with Russia on the purchase of Sukhoi aircraft. We need to strengthen our Air Force,” he said.

According to him, complex tests of the Bavar-373 air defense missile system will be held in the near future. “At the request of the President (of Iran Hassan Rouhani), the first test will be intercepting a ballistic missile. If the tests prove successful, the system will go into serial production, and its combat deployment will begin before the end of the year”, the minister said.

On Sunday, Tehran hosted an exhibition of achievements of the Iranian defense industry. The exhibition for the first time presented to the general public the Bavar 373 system, which, according to Iranian sources, is an analogue of Russia’s S-300, as well as Iran’s first national turturbojet engine that has been named Owj.

Iran had signed a contract with Russia on the supply of the S-300 missile defense systems in 2007. However, its implementation was suspended after the United Nations Security Council passed on June 9, 2010 resolution 1929 which banned the transfer of any state-of-the-art weapons, including missile and missile systems, to Teheran. In April 2015, Russian President Vladimir Putin lifted the ban on supplies of S-300 systems to Iran and the contract was resumed in November 2015.

The contract will be implemented by the year end, according to Sergei Chemezov, CEO of Russia’s state corporation Rostec.

June 5 – The Russian Aerospace Forces will receive first units of the Sukhoi T-50 (PAK FA) fifth-generation fighter aircraft in 2017, Col. Gen. Viktor Bondarev, the Russian Aerospace Forces commander, said Saturday.
“There are five [T-50 fighters] at the [Russian] Chkalov’s State Flight Testing Center, they are being tested, and beginning in 2017 they will be arriving to our service,” Bondarev told repor…ters.
The commander stressed that there were no delays and the development of the aircraft had been carried out ahead of the schedule.
“The aircraft is truly amazing by piloting, navigation and other characteristics, it detects other aircraft at a very large distance, it has no equal in this. We have much to be proud of, and we are delighted to receive such an aircraft,” he added.
The T-50 was presented at the Crimea’s eastern Chauda practive range earlier in the day.

According to the Russian military, Su-34 jets operating in Syria have destroyed a series of oil production facilities operated by terrorists near Raqqa.

Raqqa is the self-proclaimed capital of the terrorist group Daesh, also known as IS/Islamic State. The city also allegedly served as a waypoint for terrorist oil making its way into Turkey.

On March 14, Russian President Vladimir Putin announced that the Russian Aerospace Forces unit had fulfilled its mission in Syria and that its withdrawal would begin the following day. Moscow does, however, maintain a military presence in Syria, as a deadline for a complete pullout has not yet been announced.

Last month, Russian and Syrian Air Forces carried out coordinated airstrikes against Daesh in the province of Raqqa.

During the Russian military campaign in Syria, a series of technical glitches were found in the newest Sukhoi jets, defense industry sources said.

According to the Russian Defense Ministry, the operation involved Su-34 bombers and Su-35S multirole jet fighters.Malfunctions were detected in the flight control system and engines of the aircraft, the sources told RNS news agency. They added that the malfunctions were “not critical” and had no impact on the course of the campaign.

Specialists from the Sukhoi Design Bureau as well as two Russian aircraft manufacturer were at the Hmeymim airbase, the centerpiece of the military campaign.

The sources said that maintenance and details replacement were carried out at the base. All glitches were minor and fixed within a very short time.

Last October, Strategy Page reported that the Russian military faced difficulties with maintaining its modern warplanes in the sand and dust of the Middle East. Russian maintenance crews worked overtime to adapt the aircraft involved in the operation to the environment.

The Su-34 is one of Russia’s most advanced combat jets. The Syrian campaign involved six Su-34 bombers. The development of the aircraft began during the Soviet era, and the first prototype conducted a test flight in 1990. In 2006 the Su-34 began its flight tests and on March 21, 2014, the aircraft entered service with the Russian Armed Forces.

The Su-34 is Russia’s most advanced interdiction aircraft. It made its combat debut over Syria recently. It is armed with R-73 dogfighting missiles and R-77 long-range radar-guided air-to-air missiles. The aircraft has a combat radius of nearly 700 miles on internal fuel but is also capable of aerial refueling.

The Su-35 fighter jet is an upgraded version of the Su-27 multirole fighter. It was first introduced to a foreign audience at the 2013 Paris Air Show.

A Su-30 SM aircraft prepares to take off from the Hmeimim airbase in the Latakia Governorate of Syria. © Ramil Sitdikov
As Russia’s Vladimir Putin announced the start of the withdrawal of Russian forces from Syria, Defense Minister Sergey Shoigu has reported the anti-terror operation’s achievements to the Commander-in-Chief.

“Backed by our aviation, Syrian forces have freed 400 populated areas and over 10,000 square kilometers [3,860 square miles] of territories,” Shoigu said during a Kremlin meeting with Russia’s President Vladimir Putin on Monday.

Terrorists have been forced out from Latakia and Aleppo, and Palmyra has been “blocked,” the military official reported to Putin, saying that military actions to free the UNESCO heritage site from militants continue. Hama and Homs Provinces in central Syria have been largely mopped up, and Kuweires airbase that had been besieged by terrorists for over three years was retaken.

Saying that Russia’s Air Force in Syria has conducted more than 9,000 sorties starting from September 30, 2015, the Defense Minister added that for the first time massive strikes at a range over 1,500 kilometers [930 miles] with both air and ship-launched missiles have been conducted.

With Russia’s support from the air, the Syrian army managed to retake control of oil and gas fields near Palmyra. Three large fields have already started functioning in normal mode, the minister added. In all, 209 oil production facilities and almost 3,000 oil delivery vehicles have been destroyed by Russia’s airstrikes.

“As a result of airstrikes, terrorists’ resources’ provision has been largely cut,” Shoigu told Putin, saying that petroleum trade routes with Turkey, as well as main routes of weapons provisions to terrorists have been blocked.

The Russian campaign also reduced the threat posed to Russia by Islamic militants, as over 2,000 fighters from Russia have been “eliminated” in Syria, including 17 field commanders.

To strengthen the progress achieved, Russian continues the aerial monitoring of the ceasefire’s observance.

“A fairly large number of unmanned aerial vehicles – over 70 – are being used for this purpose, as are all means of gathering intelligence, including electronic intelligence and our satellite constellation,” Shoigu stated.

Russia has commenced the creation of a 6-generation jet fighter.

“Of course, there were talks today about planned work, ideas for the creation of a sixth-generation fighter. Of course, we are still working on the fifth generation, but the developers are looking forward and that is the right thing to do,” Rogozin said following a meeting on the development of Russia’s military aviation.

Currently Russia is testing its fifth-generation aircraft, PAK FA. The jets will enter service in 2017.

The deployment of Russia’s super-maneuverable multirole Su-35S fighter jets in Syria immediately grabbed global headlines, which touted the warplane as “one of the world’s most dangerous fighters.”

Russia’s deployment of four state-of-the-art Su-35S fighter jets to Syria swiftly hit international headlines, with Western media describing the Su-35 as one of the most dangerous fighters in the world,” according to the Russian newspaper Rossiyskaya Gazeta.The newspaper mentioned the German magazine Stern, which stated that the Su-35S can be considered the world’s deadliest fighter jet other than the fifth-generation US F-22.

As far as flight characteristics are concerned, the Su-35 is significantly superior to its competitors, combining the best features of the fourth generation fighter and the basic features and properties of a fifth generation warplane, according to Stern.

The magazine was echoed by the US newspaper Washington Times, which said that the Su-35S will add significantly to Russia’s ability to protect its aircraft in any area of the Middle East, in light of Turkey’s downing of a Russian bomber in Syria in November 2015.

“The deployment also sends a message to Turkey that, in combination with the S-400 anti-aircraft missile system, Russia can defend its aircraft anywhere in theater with weapon systems equal to or even more capable than NATO can field,” the newspaper said.

The US international affairs magazine The National Interest in turn quoted a high-ranking US military official as saying he was quite impressed with the Su-35S.

“It’s a great airplane and very dangerous, especially if they make a lot of them. I think even an AESA [active electronically scanned array-radar equipped F-15C] Eagle and [the Boeing F/A-18E/F] Super Hornet would both have their hands full,” he said.

The Su-35S’s super-maneuverability is provided by a new engine with thrust vector control, which allows the aircraft to reach supersonic speeds without using afterburners.

Defined as a Generation 4++ fighter, the Su-35S is capable of flying at a speed of up to 2,400 kilometers per hour and ascending to a height of 20,000 meters. The plane’s maximum range stands at 3,600 kilometers, and with an additional fuel tank the figure can be increased by 900 kilometers.

Notably, the Su-35S was developed with the help of high technology used in the creation of Russia’s fifth generation aircraft, the T-50 PAK FA. For example, the Su-35S’s crew consists of one pilot, and the plane is controlled without using analog devices, which were replaced with just two screens on which all the information is displayed.Western military experts were especially impressed with the Su-35S’s sophisticated phased-array radar control system Irbis, which allows the plane to detect targets at distances of up to 400 kilometers, as well as track aerial targets and engage up to eight of these targets simultaneously.

On February 1, Russian Defense Ministry spokesman Igor Konashenkov said that the four Su-35S fighters have been deployed to Hmeymim Airbase in Syria. The warplanes are expected to provide coverage for SU-24 bombers, which launch airstrikes on Daesh and Al-Nusra Front militants in Syria.