After their successful use during the Russian military campaign in Syria potential buyers are standing in line for the aircraft, military analyst Konstantin Sivkov told Sputnik Radio.

Indonesia, India and Malaysia have expressed interest in buying Russian-made Su-34 and Su-35 jets.Su-34 jet fighters/bombers were deployed to Syria from the first day of the operation. They destroyed terrorist infrastructure facilities and command points. Su-35s were deployed to Syria later. They provided protection for the striking force.

The high efficiency and reliability of Russian military hardware has drawn the interest of many potential buyers, Sivkov said.

“Before the Syrian campaign, for almost 25 years, the global image of Russian military hardware was not good. Potential buyers often kept away from buying it. But during the operation in Syria Russian weapons proved their effectiveness and reliability. And this drew enormous interest from potential customers,” he said.

According to Sivkov, Russian hardware knows no rivals in terms of effectiveness-to-cost ratio. While its technical specifications are comparable with US-made weapons costs are much lower.

“For example, the Su-34 has equipment allowing use of ‘dumb’ bombs with accuracy close to smart munitions. Americans can’t do this. This is why there is so much interest for Russian jets,” he pointed out.As for other parameters like flight specs, avionics and weapons Russian warplanes can provide competition to US-made jets, he added.

He assumed that all of the above is considered by potential buyers, and the number of contracts will increase.

Among other potential buyers are also Venezuela, Brazil and Argentina, he added.

The contract was signed but it has not come into effect yet, as both sides have not ratified the deal.

MOSCOW .  Russia will not start deliveries of Su-35 fighter jets to China in 2016, the head of Russia’s state technologies corporation Rostec said.

“Not this year,” Sergei Chemezov said in an interview with The Wall Street Journal, responding to the question about the date of the first Su-35 delivery to China.

According to Chemezov, the contract was signed but it has not come into effect yet, as both sides have not ratified the deal.The ratification is expected to take place in “summer or fall” of 2016, Chemezov added.

In November 2015, Chemezov announced that Russia and China had signed a contract, estimated to be worth $2 billion, on the delivery of 24 Russian Sukhoi Su-35 fighter jets.

The Su-35 is a 4++ generation aircraft employing technologies of the fifth generation, designed by the Sukhoi Aviation Holding Company, which belongs to the United Aircraft Corporation. The fighter jet (NATO reporting name Flanker-E) is an upgraded version of the Su-27 multirole fighter. It was first introduced to a foreign audience at the 2013 Paris Air Show.

RYAZAN (Russia), (Sputnik) — Moscow and China agreed on the purchase of 24 Su-35 fighters in 2015.”Currently, the work on modernizing the IRBIS-E was finished, a contract for the supply of Su-35 aircraft to China was concluded,” Pavel Budagov told RIA Novosti.

IRBIS-E, developed by Russia’s Tikhomirov Scientific Research Institute of Instrument Design, provides detection, tracking and coordination of targets day-and-night, under all weather conditions, as well as in the conditions of natural noise and jamming.

Indonesia will not receive the first batch of Russian Su-35 multirole fighters earlier than in 2018 due to the overload of the aircraft’s sole manufacturer with domestic and international orders, media reported Wednesday, citing a source in the Russian Defense Ministry.

The manufacturer had produced 14 Su-35, several Su-30МК2 aircraft for Vietnam and modernized Su-27 in 2015, the Russian Izvestia newspaper reported.

“Today, a full transition of the enterprise to the production of modern Su-35 is on the agenda. However, this will not affect the queue. The plant is due to produce 50 aircraft for Russia’s Aerospace Forces within five years, and 24 for China. Indonesians could expect to receive two jets in 2018 in a best-case scenario,” the source told the newspaper.

The Su-35S is a 4++ generation one-seater, an upgraded version of the Su-27 multirole fighter with features comparable to a 5-generation aircraft. It is characterized by supermaneuverability and is equipped with new avionics, a modern radar and advanced engines. It can accomplish incredible tricks without deceleration and can fly at a speed of 2400 kmph, outpacing all rivals in its class. The warplane is armed with 30mm guns, a huge number of missiles and rockets.

“We need a squadron of the jets, but for the first phase it will be 10 jets,” Indonesian Defense Minister Ryamizard Ryacudu was quoted by the Jakarta Globe as saying.

Indonesia currently has 16 F-5 fighter jets that entered service in 1980.Four Su-35s have been deployed to Syria amid Moscow’s counterterrorism campaign.

The 4++ generation Su-35 is characterized by supermaneuverability and has features of a 5-generation aircraft. The fighter has new avionics, a modern radar and advanced engines. It can accomplish incredible tricks without deceleration and can fly at a speed of 2400 kmph, outpacing all rivals in its class. The warplane is armed with 30mm guns, a huge number of missiles and rockets.

In January, Russian Minister of Industry and Trade Denis Manturov said he hoped that his country would maintain the turnover with Indonesia in 2016 at around $2 billion.

According to the minister, the bilateral projects between the sides could in the future include building a shipyard in Indonesia. Russia’s United Shipbuilding Corporation has been holding talks with Indonesian companies over the issue, Manturov said.

Last month, a source in the Russian defense industry said that Indonesia planned to buy four Beriev Be-200 amphibious planes from Russia, adding that a contract could be sealed shortly. 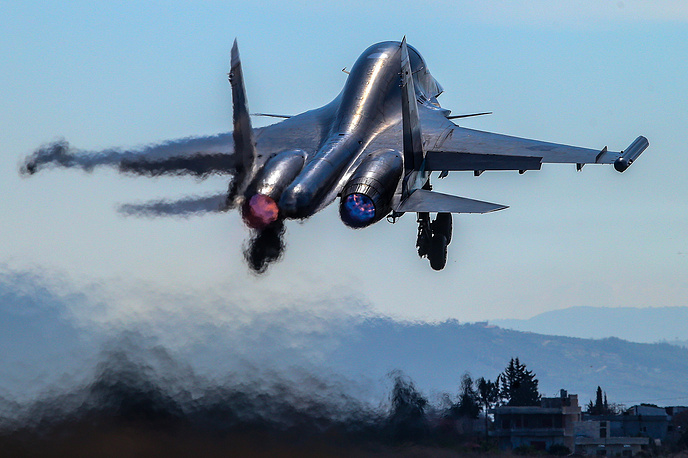 MOSCOW, February 20. (TASS-DEFENSE). The current year seems to be a watershed one for Russia’s Sukhoi fighters and bombers at the global arms market. As a high-ranking military-diplomatic source told at the Singapore Airshow 2016, a number of countries had already revealed their keen interest to Russian fixed-wing aircraft.

“Deliveries of Su-35S to China are likely to begin in late 2016 – early 2017. Su-35S is a sophisticated aircraft,” he said adding, that export modification of the fighter will be supplied.

It was reported in November 2015 that Moscow and Beijing had agreed on supplies of 24 fighters, as well as ground equipment and spare engines. The deal was valued at not less than $2 billion. China has become the first international buyer of Russian Su-35S which are currently supplied to the Russian Air Force.

“Indian Air Force faces a number of problems. The purchase of French Rafale fighters is in doubt and no serial production has been launched for Indian aircraft designs,” he pointed out.

“The equipment of the national Air Force with new combat aircraft is vital, and the purchase of another 40 Su-30MKI fighters sets for local assembly will help India,” the source said.

If agreement is reached the additional Su-30MKI sets delivery terms will be agreed in an appendix to the main contract.

India has ordered 272 Russian Su-30MKI fighters in total. The first contract for the purchase of 230 aircraft in Russia and their licensed production in India by Hindustan Aeronautics Limited Corporation (HAL) was signed in the middle of the ’90s. In December 2012, HAL signed another contract worth USD1,66 billion for additional 42 locally assembled Su-30MKI.

India assembles the fighters according to the license obtained by HAL. Since 2007, Russia has delivered 50 aircraft in flyaway condition. Then India has assembled 134 licensed fighters. The national Air Force plans to deploy 14 Su-30MKI squadrons by 2018. Therefore, at least 272 fighters should be delivered by this time.

A contract with Algeria for Su-34 (NATO reporting name: Fullback) front-line bombers delivery may be signed in  2016, according to the source.

“The related talks are ongoing and they have reached an advanced stage. The contract has yet to be signed. They have been willing to get Su-34s for a long period of time. Previously, the aircraft did not have the export certificate. Now the appropriate documents have been obtained. I believe the contract will be signed in mid-2016 or definitely by the end of the year,” he said.

“There is a mutual interest in the deal. Everything will be done this year,” the source said.

Previously, a source in the United Aircraft Corporation said the talks on the sale to Algeria of 12 Su-32 front-line bombers (Su-34`s export designation) have considerably advanced. In total, the North African country may acquire up to 40 aircraft of such type.

Russia plans to sign a deal for the multifunctional Su-35S fighters with Indonesia in May 2016, the source said.

“Talks with Indonesia are at advanced stage. There is a small technical issue. I believe it will be resolved by May and the contract for the delivery of Su-35S to Indonesia will be signed,” he said.

“The contract for the delivery [of Su-35 fighter jets] is likely to be signed at the Russia-ASEAN summit in Sochi (19-20 May 2015). The summit will be a momentous event,” the source said, without specifying the exact number of Su-35 fighter jets Russia would deliver to Indonesia.

Indonesian news agency Antara reported that the national defense ministry had chosen Su-35S fighters to replace obsolete F-5E/F Tiger II. The contract may be for 16 Su-35S. 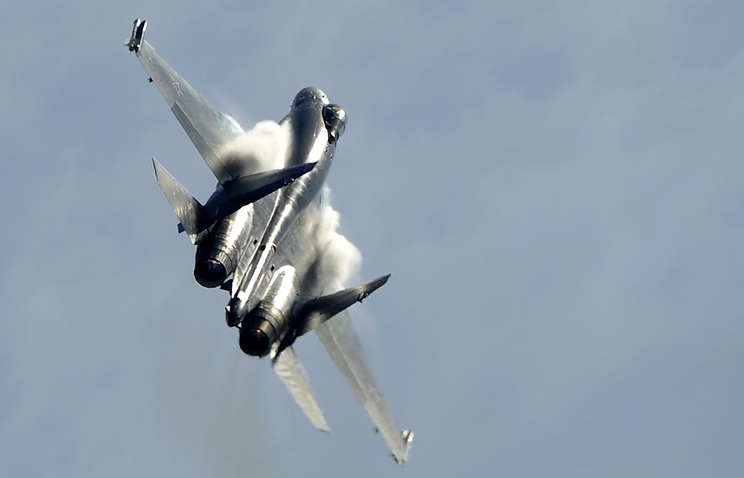 MOSCOW, February 19. /TASS/. Russia will supply first four Su-35 jets to China by the end of this year in accordance with the contract signed last year, a source in military-technical cooperation sphere told TASS on Friday.

Moscow and Beijing signed a contract last year on delivery of 24 Su-35 jets to China worth at least $2 billion. China was the first foreign country to purchase this new generation aircraft. A source in the military-technical cooperation sphere previously told TASS that the contract will be fulfilled in three years.

The United Instrument Manufacturing Corporation (part of State Corporation Rostec) told TASS earlier that they already started manufacturing communications systems for Su-35 that will be supplied to China.