August 30 – India, with the help of Russia, plans to set up a logistics hub for its most lethal combat aircraft, the Su-30MKI, at the facilities of Hindustan Aeronautics Ltd (HAL) in Bangalore. Sources from India’s Ministry of Defense told, “we are trying to ensure the maximum operational availability of Su-30MKI fighters at any given time. We have improved the serviceability of the aircraft from 46% to… more than 60%. Notwithstanding, the Indian Air Force (IAF) has also finalized long term repair agreement with Russian original equipment manufacturers to improve the availability of aircraft for operational use but the long process of getting spare parts delivered is negatively impacting the operational availability of the aircraft….A spare parts logistics center will solve this problem.” Currently, it takes up to 18 months to deliver spare parts to India from Russia, mainly due to cumbersome bureaucratic process, customs, bank guarantees, etc. Air Marshal P. P. Khandekar, Air Officer-in-Charge for Maintenance at Air HQ IAF says, “For a small fleet, there is no need to set up infrastructure in the country. Our indigenous infrastructure development requirement is mainly for when the fleet is large.” Currently the Indian Air Force has more than 200 Su 30 MKI in its fleet and is expected to receive the remaining fleet by 2019. India contracted for the delivery of 272 Su 30 MKI with Russia.

New Delhi and Moscow near an $8 billion deal to upgrade the fearsome Su-30MKI fighter jet into the Super Sukhoi, but the deal does not threaten the joint Indo-Russia fifth-generation fighter aircraft (FGFA) program.

Negotiations between New Delhi and Moscow have ramped up with India planning to upgrade 194 warplanes to become fifth-generation Sukhoi SU-30MKI fighter jets at a cost of more than $8 billion, Defense News reported this week.Defense News quoted an anonymous senior official at India’s Ministry of Defense who said, “A Russian team was in New Delhi earlier this month to discuss [the] upgrade plan with India, which will be finalized in the next four to six months.”

The new planes will be known as “Super Sukhoi” jets with upgrades featuring improved stealth abilities, longer ranger missiles and radars, a supersonic cruise missile and an advanced suite of avionics.

“A major part of the upgrade involves avionics and sensors,” said Muthumanikam Matheswaran, a retired Indian Air Force officer. “These are completely new with new systems and new software. Hence it has no relation to old problems with software. Engine issues will have to be dealt with.”

According to an anonymous Russian diplomat, a prototype of the plane will be developed in Russia while the actual upgrades will be done at India’s state-owned Hindustan Aeronautics Limited.

The Indian Air Force confirmed that the Su-30MKI upgrade will not impact the proposed Indo-Russian Fifth Generation Fighter Aircraft (FGFA) program – worth $25 billion. Analysts believe, however, that a possible diversion of India’s defense funds towards the Super Sukhoi could delay the FGFA.

India and Russia first signed a Prelminary Development Agreement in 2011 to jointly build the FGFA, but  a final agreement which will require a roughly $6 billion payment by New Delhi towards the development of the fighter jet has yet to be inked as the two sides continue to negotiate issues relating to production work share.

Asked about the rationale of pursuing the substantial and costly upgrades to India’s existing SU-30MKI fighter jets rather than purchasing new aircrafts whole, Matheswaran explained, “An upgrade at the maximum will be about half the cost of the original aircraft in Su-30 generation. A new aircraft in place of Su-30 means FGA, which is far more expensive.”

Dajit Singh, a retired IAF Air Marshal and defense analyst, explained that there will be significant differences between the upgraded Super Sukhoi and the coming FGFA fighter jet.

“FGFA has some distinct features, which Super Su-30MKI will not have,” said Singh. “These include internal weapon-carrying bays to enhance stealth features, integrated internal fit of the electronic warfare suite, super-cruise capability and inherent stealth design.”

“Su-30 cannot be redesigned as a stealth aircraft,” Singh continued. “Any changes of the wing design and material to improve stealth would be very expensive and time consuming and would be akin to a different design. Therefore, the FGFA project may not be canceled in total in view of the Su-30 upgrade.”

According to annual report, Russia’s Irkut aircraft manufacturer will finish the deliveries of 14 Sukhoi Su-30MKA multirole fighters to Algeria in 2017.

Russia’s Irkut aircraft manufacturer will finish the deliveries of 14 Sukhoi Su-30MKA multirole fighters to Algeria in 2017, Irkut said in an annual report on Monday.

“The deliveries of Su-30MK aircraft to the People’s Democratic Republic of Algeria are planned for a period of 2016-2017,” the report obtained by RIA Novosti said.

“In September-October we are going to hold the first practical air launch of the missile. We have already completed 90 percent of works on the complex. Our military are inspired by fire power and range capability, which will be provided by the deadly combination of the most progressive fighter and our missile,” Pathak told the Izvestiya newspaper.

He added that in order to equip the fighter with the BrahMos missile, it was necessary to make changes in the jet’s design.

The company carried out a demonstration of a Su-30 MKI fighter equipped with a BrahMos missile on June 25.

BrahMos is a short-range supersonic missile, which has been in use by the Indian Navy since 2005. The missile has a range of 180 miles and can carry a conventional warhead of up to 660 pounds. 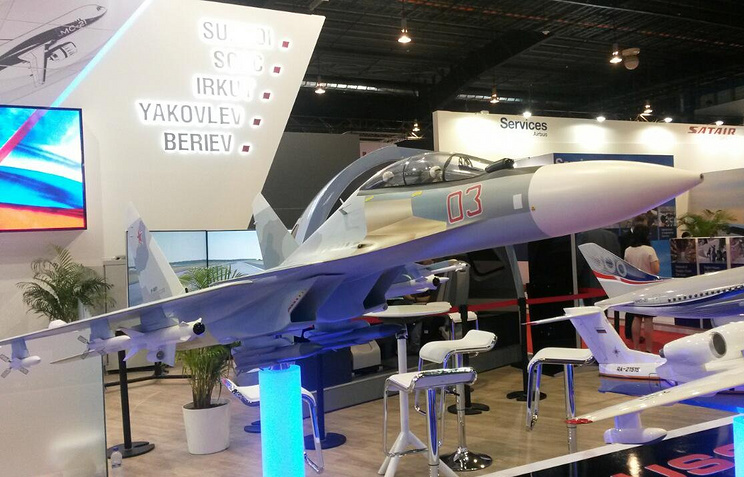 MOSCOW, February 17. /TASS-DEFENSE/. Russia has unveiled the export version of the Sukhoi Su-30SME (NATO reporting name: Flanker-C) multipurpose fighter jet at the Singapore Airshow 2016, a source in the defense and industrial sector said.

“The Su-30SME aircraft [the export version of the Su-30SM fighter jet] has been shown on the international market for the first time,” the source said.

“Its development aims to offer foreign customers a fighter jet equipped with a Russian-made avionics suite,” the source added.

Unlike the Su-30MKI fighter jet, the avionics suite mounted on the Su-30SME aircraft’s version lacks French-made components, the source said.

According to the source, Southeast Asian, Middle East and North African countries have already shown interest in the new fighter jet.

The Su-30SM (SM standing for serial-produced, upgraded) multipurpose fighter jet is designed both to gain air supremacy and attack ground and surface targets. The fighter jet has canards and engines with a controlled thrust vector, which makes the aircraft supermaneuverable.

The Su-30SM fighter jet is equipped with the Bars multipurpose control radar.

The article was published on the ‘Russia’s Defense Technologies’ newswire.

The Corporation “Irkut” is ready to deliver to India an additional batch of the multifunctional Su-30MKI fighters, if such an order is received, stated official representative of the corporation to reporters on Wednesday.

“From our side, we are fulfilling all contractual obligations. If the Indian leadership decides on the purchase of an additional batch of Su-30MKI fighters, we are ready to fulfill that order”, he said at the ongoing International Airshow- Singapore Airshow 2016.

According to the corporation’s representative, licensed production of these aircrafts at the factory of the HAL Corporation in India is continuing.

“According to the Indian Air Force, at present, more than 200 Su-30MKI fighters have been inducted into active service”, he added.

India intends to sign an agreement with Russia for the purchase of spare parts for Su-30MKI fighter jets for the next five years.

“The visit of representatives of the Indian Ministry of Defense is expected in the second half of December and we hope to be able to come to a positive solution and conclude an agreement as soon as possible,” representative of the Sukhoi holding told the Economic Times.

The agreement, according to the publication, will ensure that the aircraft will be able to perform more combat missions and will be aimed at reducing maintenance times, which is one of the key objectives of the Indian Defense Minister Manohar Parrikara.

According to The Economic Times, previously a major problem with supplying the spare parts was the length of time it took from the moment the Indian military made a request for purchase, till the time they actually began to produce the parts in Russia.

This period was approximately 12 months but now the military hopes to reduce it to 30 days.

The multifunctional Su-30MKI fighter is produced at the Irkutsk Aviation Plant Corporation ‘Irkut’.