Wing of modernized Su-25SM attack aircraft returned to the Kant Russian airbase located in Kirgizia after carrying out training flights over the Urals.

Pilots conducted 3.500 km flight from the Shagol airbase (Chelyabinsk Region) with an average speed of 750 km/h with 2 refuelings (in Novosibirsk and Karaganda)

During 2 weeks, Su-25 SM crews practiced rocket firing on land targets at day- and nighttime at the Safakulevo air range (Kurgan Region). The targets simulated illegal armed formations and columns of their automobile technologies on march.

The main flights aim is improving crews air training on the unfamiliar area.

Russian pilots also took part in the flypast on May 9 in Yekaterinburg. The parade wing flew over the centre of the city at the altitude of 250 m with the speed of 400 km/h. 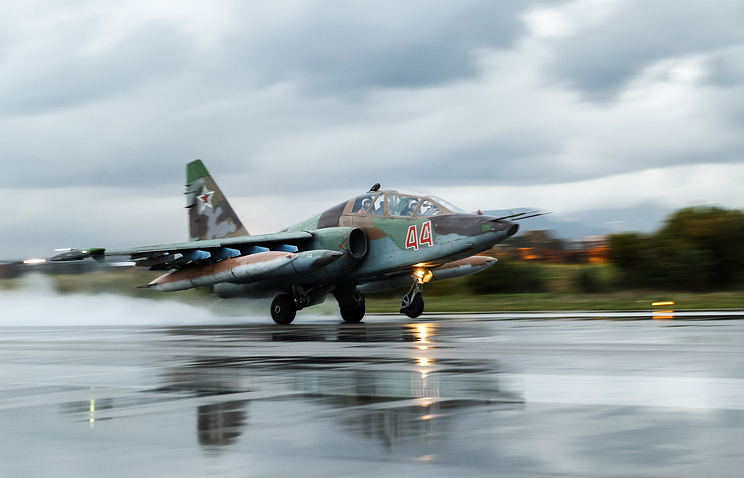 According to him, “a batch of Su-25 (three aircraft) has arrived in Iraq in accordance with the contract signed with the Russian side.” The Iraqi defense spokesman also said that the attack aircraft would enter service in the near future. According to him, this will give additional advantage to the Iraqi army in the fight against terrorist groups, including the Islamic State (terrorist group banned in Russia).

Since the beginning of the active offensive of the IS group, Russia has delivered to Iraq several Su-25 strike fighters.

Su-25 is Russia’s strike fighter, designed for providing round the clock support to ground troops hitting objectives within the visibility range, as well as for attacking target-point facilities in any weather conditions.

Islamic State is a terrorist organization outlawed in Russia. The IS group currently controls large areas of Iraq and Syria. In 2013-2014, it operated under the name of the Islamic State of Iraq and the Levant (ISIL).