It will take another three months to liberate the Iraqi city of Mosul from the Daesh militants if the offensive continues progressing at the rate it is now, President of the Iraqi Kurdistan Region Masoud Barzani said.

On October 17, Iraqi Prime Minister Haider Abadi announced the start of a military operation to retake Mosul from Daesh, a jihadist group outlawed in Russia and a number of other states.

“We see that they [Daesh] have hundreds of suicide bombers, they must have factories for production of explosives. This would create great danger during the assault. If everything goes well, I expect that it will be possible to liberate the city in three months at the latest,” Barzani told the Bild tabloid in an interview published late on Thursday.

According to the official, the Kurdish Peshmerga fighters will not participate in the offensive in the city itself, as they are bound by an agreement with Baghdad and the international US-led coalition.

“However, if they were to ask us and there were a new agreement, we would of course help, we are ready for this.”

According to local media, about 30,000 Iraqi soldiers and 4,000 Kurdish Peshmerga fighters are taking part in the operation, backed by airstrikes carried out by the US-led international coalitio 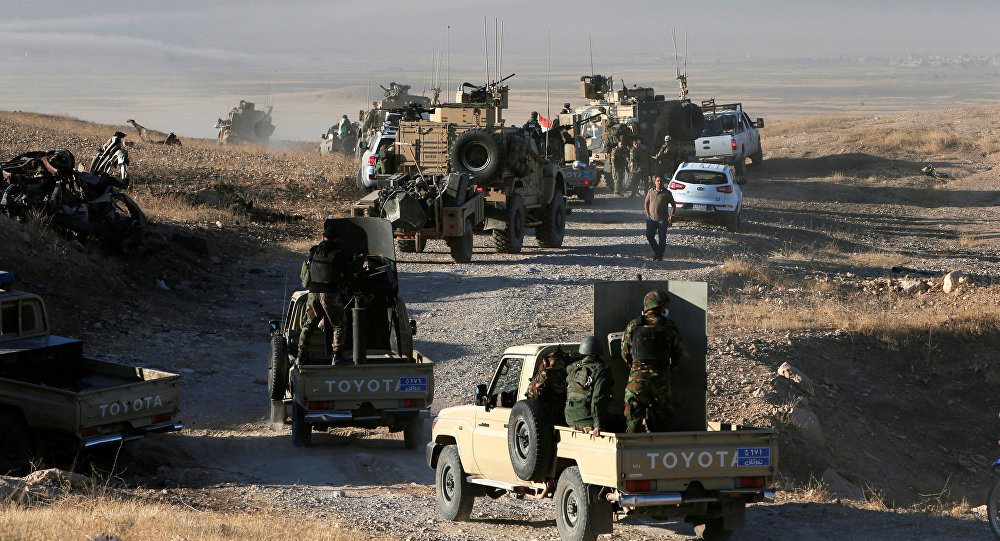 As the Iraqi army and its allies continue their assault against the Daesh stronghold of Mosul, one of the Kurdish Peshmerga commanders has revealed that his men are now only a few kilometers away from the city limits.

Scores of Daesh (ISIL/ISIS) militants were eliminated by Kurdish Peshmerga forces in the Iraqi province of Nineveh as part of the preparations for the assault on Mosul.Peshmerga General Juku Muhammed Kalahi told Sputnik about how his Kurdish troops had liberated several villages.

“Our forces terminated scores of Daesh members during the liberation of the following villages: Al-Sheikh Khamis, Kazkan and Shaquli. Right now we’re one kilometer away from the town of Bartella,” the general said.

According to Kalahi, Daesh manpower reserves were depleted during clashes in the province of Nineveh, where the Iraqi military and its allies scored victories in El-Kueir and Al-Khazer several hours ago.

Earlier a source in the Iraqi security services told Sputnik that today, on October 17, the military and its allies dislodged Daesh forces from the vicinity of Bashiqa – a town located only 12 kilometers away from Mosul.

Since the Middle Ages, Bartella had been inhabited by Arameans, an early group of Christians who used a language akin to that spoken by Christ; its population of 30,000 was roughly one third Catholic and two thirds Orthodox and boasted churches dating back to the 12th century. However, in August 2014, the city residents fled ahead of invading Daesh forces; its last 12 surviving residents faked conversion to Islam and were able to escape the following month, according to AINA News.

As the Iraqi army and its allied Peshmerga units prepare a major offensive on Mosul to flush out Daesh terrorists, Helgurd Hikmet, a representative of the Regional Government of Kurdistan, discussed the details of the upcoming operation with Sputnik.

An estimated 50,000 Iraqi soldiers, backed by 20,000 Peshmerga fighters, 10,000 Turkmens and members of Sunni tribes will take part in the offensive.“The Iraqi army and Sunni tribesmen will be spearheading the offensive, with Peshmerga and Turkmen forces bringing up the rear. Coalition air forces will provide air cover. The Peshmerga said they would not enter the center of Mosul arguing because it just won’t be right for Kurds to take control of an Arab city,” Helgurd Hikmet said.

He added that apart from airstrikes, the US-led coalition would also provide logistical support for the advancing forces.

During their recent meeting in Washington, the foreign ministers of the countries – members of the US-led coalition against Daesh – prioritized the need to liberate Mosul.

Helgurd Hikmet said that the army would need about a year to completely flush out Daesh forces defending the strategic northern city.

“The Peshmerga forces that now control the city’s western, northern and eastern suburbs will be advancing towards the city center. The Iraqi army now controls the southern and southeastern suburbs and the outskirts of the town of Makhmour,” Hikmet explained, adding that the Iraqi army had recently killed one of the leading Daesh field commanders, Omer ash-Shishani.

He also said that said that Americans didn’t like Baghdad’s idea of the Shiite militia taking part in the operation to liberate the predominantly Sunni-populated Mosul.

The Shiite fighters, who earlier took part in operations to liberate Fallujah and many other Iraqi cities, are accused of committing atrocities against the Sunni population, further igniting divisions, which could result in a serious interfaith conflict. Another reason why Washington wants the Shiites to stay away is their close links to Iran.

“On the other hand, the Americans welcome the participation of Turkish-trained Turkmen fighters. Turkey, for its part, is against the participation of Shengal self-defense forces of Yazidis and people linked to the Kurdistan Workers Party, which are banned in Turkey,” Helgurd Hikmet noted.

“The Iraqi army, Peshmerga and other forces need to iron out their differences before the operation to liberate Mosul actually starts,” Hikmet emphasized.

In an interview with Sputnik, Aydin Maruf, the coordinator of the Iraqi Turkmen Front in Erbil and a member of the Kurdish parliament in Iraq, said that an operation to drive Daesh militants out of Mosul’s suburbs had already begun.

“What we don’t know yet is when exactly the operation to liberate the city itself is going to start. Before this happens all the participating forces need to reach agreement. We, Turkmens, will certainly take part in that operation because there are more than half a million of our people living there and liberating them is a topmost priority for us,” Aydin Maruf said.