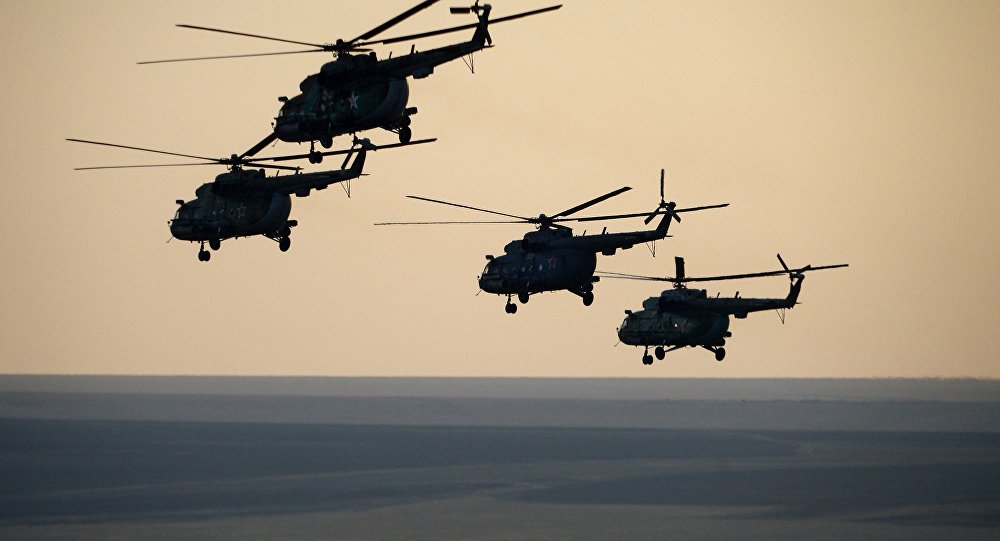 The eighth biennial Vibrant Gujarat forum is taking place in Gujarat’s capital Gandhinagar on January 10-13 and is due to kick off in several hours. This year’s event focuses on sustainable economic and social development. It is the largest regional forum in India, in which business leaders, government representatives and experts from India and all over the world take part. The forum aims to attract investments to the state’s economy and develop regional industry.
Today, India is one of the main operators of Russian helicopters. It is worth mentioning that the country’s authorities are also showing an interest in civilian vehicles. India already operates civilian Mi-172 helicopters… We are interested not only in selling military equipment, but also in setting up long-term relations with our Indian partners and are ready to offer them a number of additional services, including after-sales services,” Russian Helicopter Deputy CEO Alexander Shcherbinin was quoted as saying in a company statement.
India currently operates some 400 helicopters made in Russia and intends to further boost this number, according to the company.
India uses a broad range of Mil Mi-17 and Mi-8 transport helicopter variants. These are used in search and rescue operations, passenger transport and are involved in the protection of forests and fisheries.

The warships will practice repelling aerial attacks, joint maneuvering as part of tactical groups, shelling naval and aerial targets, as well as elements of antisubmarine defense.

VLADIVOSTOK — A squadron of warships of the Russian Pacific Fleet, including the large anti-submarine warfare ship Admiral Tributs and the Boris Butoma fleet oiler, has left the Indian port of Visakhapatnam to participate in the joint Russian-Indian naval drills Indra Navy 2016, spokesman for the Russian Defense Ministry’s Eastern Military District Vladimir Matveev said Sunday.
“The active phase of the drills will be held on December 19-21 in the Bay of Bengal. The crews of the ships will practice communication skills, repelling aerial attacks, joint maneuvering as part of tactical groups, shelling naval and aerial targets, as well as elements of antisubmarine defense and resupply on the move,”      Matveev said.
Matveev noted that subdivisions of Indian special forces and naval personnel of the Pacific Fleet would hold an exercise search operation as part of counter-piracy drills.
Indra Navy 2016 drills are being held in the Bay of Bengal on December 14-21. This year, some 500 servicemen are engaged in the drills, according to the Russian Defense Ministry.
The first joint Russian-Indian naval drills were held in 2003. The exercises were also held in 2007, 2014 and 2015.

The Joint Russian-Indian naval exercises, Indra Navy, started in the Bay of Bengal on Wednesday.

According to the press service of the Pacific fleet, a squadron of its warships, including the large anti-submarine warfare ship Admiral Tributs and the Boris Butoma fleet oiler, are set to dock at the Indian port to participate in Indra Navy 2016.

This year, some 500 servicemen are set to be engaged in the drills, according to the Russian Defense Ministry. VLADIVOSTOK, December 12. /TASS/. A surface combatant squadron of the Russian Pacific Fleet has sailed off for the Indian port of Visakhapatnam to take part in the Indra Navy joint drills, Vladimir Matveyev, a spokesman for Russia’s Eastern military district, told TASS on Monday.

“The squadron of the Pacific Fleet warship is heading to the Indian Eastern Fleet’s base in the city of Visakhapatnam under the command of Rear Admiral Eduard Mikhailov, the commander of the Maritime all-arms forces flotilla. The ships are to reach the destination on December 14,” the spokesman said.

According to Matveyev, the squadron left the fleet’s home base in mid-October. Since then, the ships have performed duty tasks in the Pacific and Indian Oceans, have taken part in the Indo Defense international arms show in the Indonesian port of Tanjung Priok and have visited Thailand’s port of Sattahip.

The drills will be held on December 14 through 21, in two stages. The coastal stage will be held in Visakhapatnam from December 14 to 18. Its program will include exchange of official visits, conference meetings on coordination, etc.

The sea-based phase will take place from December 19 to 21 in the Bay of Bengal. Participants will drill communications and night-time maneuvering skills, artillery shelling at sea-and air-based targets, skills to repel air attacks. The drills will involve ship-based helicopters. The Indian side will command the exercises.

The Indian Defence Acquisitions Council (DAC), chaired by India’s Defence Minister Manohar Parrikar, has pre-approved an armaments modernization project for the Indian armed forces for a total sum of 821 billion rupees (over $ 12 billion), the Times of India (TOI) reported.

According to the report in the TOI, what has been approved is the purchase of 83 fourth-generation Indian light multipurpose fighter aircraft Tejas Mark-1A and 464 Russian T-90 tanks, and 6 additional regiments of the Indian MRLS ‘Pinaka’.

India plans to set up a licensed assembly plant for the armoured forces through the Ministry of Defence Ordnance Factory Board.

The DAC’s approval is the penultimate barrier before the signing of the world’s largest tank contract over the past 15 years, without any exaggeration, Andrey Frolov, editor in chief of the magazine Arms Export, told Gazeta.ru.

“This confirms Russia’s place in the global market as the largest developer, manufacturer and supplier of armoured vehicles. The T-90MS will allow Uralvagonzavod (UVZ) to reach a higher level of production, while keeping all the features of earlier T-90 tanks,” said Frolov.

Frolov said that earlier, Indians did not fully realize the potential of the licensed assembly of Russian tanks, even though they already have such an experience. “Some things will be made in UVZ and others in India. In any event, both for the domestic producers, as well as for the Indian party, it would be an advantageous contract”, said a source of Gazeta.ru.

On the eve of the Defexpo 2016 India arms exhibition in March, Oleg Siyenko, the CEO of the UVZ Corporation, outlined in an interview with Gazeta.ru, Uralvagonzavod’s plans to modernize the T-90 and T-72 Indian tanks.

“The Corporation is considering the Indian market as a priority and a promising one,”, said Siyenko

UVZ’s cooperation with India began in 1978, with the delivery of T-72 tanks. Later, UVZ specialists helped in rebuilding the tank factory at Avadi to facilitate the licensed production of T-72 tanks. The latest stage of cooperation started in 2001, when the first contract for the supply of T-90S tanks to India was signed. Currently, India is implementing a programme for licensed production of the T-90 ‘Bhishma,’ and various after sales service projects of armoured vehicles, including spare parts and engines. In response to an Indian request, UVZ offered individual modernization options for T-72 tanks, and for modernization of the T-90S.

Siyenko said the Indian army plans to stop commissioning T-72 tanks in 2025-2030 and replace them with the average main battle tanks of the future. The project is known in India as the FRCV (Future Ready Combat Vehicle). The Russian T-90MS (upgraded T-90S) meets all parameters and could come under the new Indian tank fleet upgrade, said the UVZ CEO.

“I personally observed great interest, among the senior Indian military men, in the T-90MS tank at the Russian Arms Expo (RAE) exhibition in Nizhny Tagil”, said Viktor Murakhovski, chief editor of Arsenal Otechestva (Russian military review – translator’s note). The ‘Tagil’ exhibition demonstrated combat techniques in action as part of military formations, and almost at the same site, next to the static display.”If we receive a request from the Indian partners to test the upgraded T-90S, Uralvagonzavod will be ready to send it to the test”, said Siyenko.

“The Indians were really convinced of the high combat capabilities of the T-90MS, compared with the T-90 machine, which is available in service in India. T-90MS is definitely an entrance to a new level. And since this vehicle has new ammunition, we can say a new weapons system,” explained Murakhovski.

“India is therefore concerned about maintaining the military and technical superiority in the field of armoured vehicles. However, it would be rash to expect that the contract will be signed as early as tomorrow. In India, such things are not done quickly”, said Murakhovski.

The T-90 battle tank, built from 1980-1990 on the base of the T-72B, was named ‘Vladimir’ in honour of head designer Vladimir Potkin. The T-90MS is a modernized version of the tank’s export model, named ‘Tagil’. It is equipped with a 125-mm smoothbore gun – 2A46M-5 launcher, guided by missiles with laser-guided sight with thermal imager. The maximum sighting range of the armour-piercing shells is 4,000 m, and high-explosive shells – up to 9,600 m. The maximum range of the direct shot at the target height of 2 m. is 2120 m. The tank is also protected with dynamic protection against chemical and armour-piercing shells. At the customer’s request, the active protection Arena-E system to combat anti-tank guided missiles can be installed in the T-90MS.Yeni Safak, Turkey’s pro-government newspaper and the Iranian news agency Fars reported that the T-90A was involved in attacks on militants. Online videos, posted by the Syrian SANA agency where these machines are shown, proved that Russian T-90As were used.

Today, the Minister of Defence of the Russian Federation General of the Army Sergei Shoigu jointly with the head of the Indian military department Manohar Parrikar held the 16th session of the Russian-Indian intergovernmental commission for military and technical cooperation.

Speaking at the session, General of the Army Sergei Shoigu stated that double, and usually, triple standards could not be used while fighting terrorism.

According to Sergei Shoigu, military departments of Russia and India have achieved progress in joint projects, including ones concerning S-400 air defence systems.

He stated that there was a separate large-scale project concerning the fleet.

In his turn, Manohar Parrikar stated that recently signed intergovernmental agreement concerning S-400 complexes and joint production of Ka-226 helicopters had become the evidence of progressive development of military and technical cooperation between two countries. According to him, there good prospects in the nuclear field, too.

The members of the commission summed up results of the last year work, and assigned high-priority tasks in the field of military and technical cooperation of two countries.

The sides have also discussed issues of enhancing bilateral cooperation in accordance to agreements, which had been achieved in course of the visit of the President of the Russian Federation to India on October 15-16, 2016.

Moreover, they exchanged opinions on issues of regional security.

Today, the Minister of Defence General of the Army Sergei Shoigu has held negotiations in the field of defence with his Indian counterpart.

The Head of the Russian defence department invited the Indian specialists to participate in the ARMY-2017 international military and technical forum. He also suggested holding joint exercise of engineer troops of both countries aimed at humanitarian mine clearing on the base of the Russian International Mine Action Center, the specialists of which had taken part in mine-clearing operation in Palmyra.

General of the Army Sergei Shoigu expressed his gratitude to the Indian military servicemen and highly assessed their actions during the International Army Games 2016 and invited them to take part in the Games next year.

Russian Defence Minister General of the Army Sergei Shoigu has arrived in Delhi in order to head the 16th session of the Russian-Indian intergovernmental commission for military and technical cooperation with the Head of the Indian military department Manohar Parrikar.

The members of the commission are to sum up results of the last year work, and assign high-priority tasks in the field of military and technical cooperation of two countries.

The sides are also to discuss issues of enhancing bilateral cooperation in accordance to agreements, which had been achieved in course of the visit of the President of the Russian Federation to India on October 15-16, 2016.

Moreover, they will also exchange opinions on issues of regional security.

On Wednesday, the Minister of Defence General of the Army Sergei Shoigu is holding negotiations in the field of defence with his Indian counterpart.