The warhead of the missile has engaged the conditional target located at the Kamchatka range.

Check of flight tactic characteristics of the intercontinental ballistic missile was the goal of the launch.

Murakhovsky described the S-500 as an advanced, unified, multi-purpose, integrated anti-aircraft and anti-ballistic missile defense system, which is meant to replace the S-300 and complement the S-400 complex.

“This is the next step. These are air defense capabilities on operational and strategic levels,” he said. The S-500 “allows us to protect entire regions from intercontinental ballistic missiles and other advanced weapons, including hypersonic glide vehicles currently under development in the United States.” © Wikipedia/ R.L. HouseUS to Spend $17Bln on Cruise Missiles in Hope to Outwit Russia’s S-300, S-400

The analyst added that the S-500 will also be capable of hitting targets in near space, including satellites outfitted with electro-optical surveillance systems.

Murakhovsky further said that the S-500 has canceled out multi-billion dollar advanced weapons programs which the United States has pursued.

The S-500 has “displeased” the Pentagon since the US Department of Defense “has spent so much on creating the so-called Prompt Global Strike (PGS) initiative, as well as hypersonic glide vehicles and cruise missiles,” the analyst said. “All of this has gone down the drain. We are talking about hundreds of billions of dollars!”

In addition, Russia’s newest air defense system “has made Americans nervous taking into account that the S-500 is a purely defensive system and the fact that the United States unilaterally withdrew from the Anti-Ballistic Missile (ABM) Treaty,” he observed.

Washington decided to withdraw from the ABM treaty in 2001, rendering one of the key international arms agreements void.

The S-500, designed by Almaz Antey, is said to have a range of 600 kilometers (more than 370 miles). The system can simultaneously intercept up to ten ballistic and hypersonic missiles traveling at a speed of 7 kilometers per second. The Prometey is capable of engaging targets at an altitude of up to 200 kilometers (more than 120 miles). The system is capable of intercepting aircraft and UAVs, as well as destroying low-earth-orbit satellites, space destruction devices and orbital weaponry.    The S-500 will be a major upgrade to the state-of-the-art S-400 complex that is already in service.

“It is clear the S-500 is intended to serve as a high-altitude antiballistic missile system for home defense, and that its very long range could make it useful for anti-access/area denial and antisatellite tasks. It is also evident that it is designed to be mobile and hard to detect or hack into, so as to resist air-defense suppression strikes,” Sébastien Roblin wrote for the National Interest.

The analyst added that it remained unclear when the S-500 will become fully operational and whether it would “live up” to its stated capabilities. 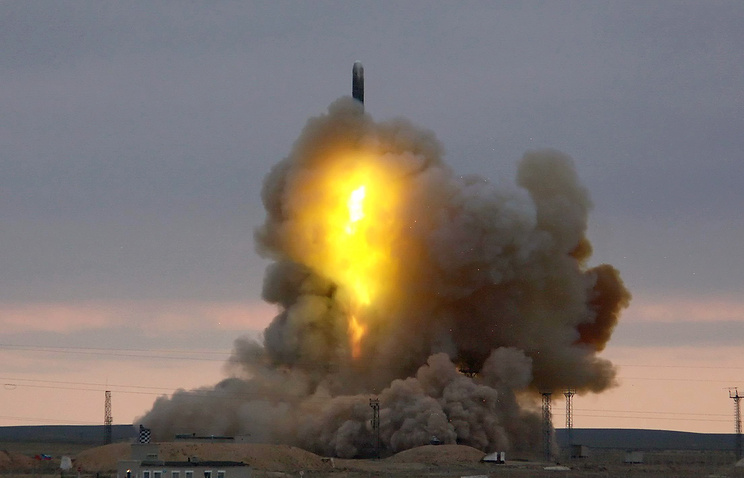 MOSCOW, October 25. /TASS/. Russia’s Strategic Missile Force has successfully test-fired an RS-18 intercontinental ballistic missile (ICBM) from the Orenburg Region in the south Urals at a practice range on Kamchatka Peninsula in the Far East, the Russian Defense Ministry said on Tuesday.

“At 11:58 a.m. Moscow time [08:58 GMT], an RS-18 intercontinental ballistic missile was launched from the position area of the Yasnensky missile formation [the Orenburg Region]. The launch has been a success and the warhead has been delivered to the area of the Kura combat field [Kamchatka Peninsula],” the Defense Ministry said.

The launch was aimed at confirming the stability of the flight and technical characteristics of these missiles, the Defense Ministry said.

According to public sources, the first modification of the RS-18 missile was put into service in 1975 and the second in 1979. These missiles are placed in silos and carry up to six 550 kiloton warheads. The RS-28 Sarmat is the newest heavy liquid-propelled intercontinental ballistic missile currently being co-developed for the Russian military by NPO Mashinostroyeniya in Reutov (Moscow Region) and the Makeyev State Missile Centre in Miass.

The beginning of Sarmat’s drop tests depends on the time of the reconfiguration of the silo at the Plesetsk site, which will be used for testing.

Russian Deputy Defense Minister Yuri Borisov said previously that the mass of the Sarmat ICBM warhead is 10 tonnes, and the missile is capable of destroying targets flying across both the North and South Pole. The Sarmat ICBM that is to replace the Voyevoda, will be created in several versions, Borisov said.

According to the developers, the advanced Sarmat will weigh within 100 tonnes. According to Yuri Borisov, its range will exceed 11,000 km.

The cutting-edge missile is designed as a successor to the world’s largest and most formidable ballistic missile, the R-36M  Voyevoda, weighing 210 tonnes and carrying 10 individually targeted warheads 750 kilotons each. The ministry said that a Topol intercontinental ballistic missile was test-launched from the Plesetsk state experimental spaceport at the final stage of the command and staff exercises of the Russian Strategic Missile Troops (RVSN).

“The main aim of the launch is to confirm the basic flight and technical characteristics of the Topol intercontinental ballistic missile and test an advanced combat outfit and means of overcoming missile defense systems,” the ministry’s department of information and mass communications said in a statement.

“The missile’s experimental warhead hit a hypothetical target with high precision at a testing ground on Kamchatka peninsula,” the Russian Defense Ministry said.

The results of the launch will be used for raising the efficiency of an advanced group of Russian ballistic missiles, the Russian Defense Ministry said.

In a Chinese television program aired earlier this month a local defense expert hailed the unique characteristics of the Russian ICBM and the fear it had instilled in the hearts of foreign militaries, Rossiiskaya Gazeta wrote.

“Russia’s new RS-26 missile travels along a continuously changing trajectory and as such it has no analogues in the world,” the expert said.

When asked about the US missile defense system, he said that it was “absolutely useless” against the RS-26.

“This one is even better than the famous Topol-M missile… Its warheads are supersonic and change their course all the time. Some of them will penetrate any existing missile defense shield and will hit their target,” the expert added.

When asked whether the new Russian ICBM had caught the Americans flatfooted, the expert said that not only the Americans were clueless but that the Chinese too now had something to worry about.

“Russia is 100-percent safe now, unlike everybody else,” he emphasized.

What makes the RS-26 so special is that even though it weighs just 80 tons, compared to the 120-ton heft of its RS-24 Yars predecessor, the Rubezh packs a frightening 1,2 megatons into its four 300 kiloton warheads.

With a potential range of 11,000 kilometers the RS-26 can hit targets all across the United States.

Moreover, its booster stage is down to under five minutes, which means that NATO radars in Europe will have no time to register the launch.

Adding to NATO air defenders’ worries, during the descending section of its trajectory, with only a few hundred kilometers left to the target, the missile’s warheads suddenly take a dive, lose altitude, and continue the approach as a cruise missile.

These new Russian ICBM warheads were developed in response to America’s plans to deploy a global missile defense system along Russia’s borders.

The RS-26 Rubezh is expected to become operational in 2016.

Earlier in the day, NATO Secretary General Jens Stoltenberg said that NATO ministers of defense agreed to boost the alliance’s presence in its eastern part as well as in the Mediterranean and the Black Sea.

“Russia will continue to strengthen its defensive potential, to improve the deterrent potential of nuclear weapons… We possess weapons that can deter our so-called partners from any critical decisions that could come to their minds,” Evgeny Serebrennikov told RIA Novosti.

He added that NATO’s activities aim at deterrence against Russia both in economic and military spheres.

Since 2014, NATO has been steadily building up its military presence in Europe, particularly in Eastern European countries bordering Russia, using Moscow’s alleged interference in Ukraine as a pretext for the move.

In September, Kremlin spokesman Dmitry Peskov said that any NATO advancement toward Russian borders would prompt Moscow to take counter-measures to ensure the country’s national security.