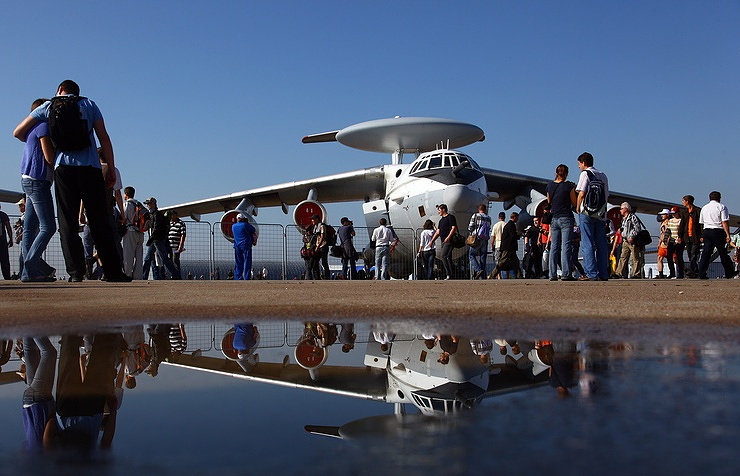 MOSCOW, September 2. /TASS/. The A-100 advanced long-range radar spotting aircraft that is currently being created in Russia surpasses the foreign analogues, Russian Defense Minister Sergei Shoigu said on Friday at a teleconference with the ministry leadership.

“The A-100 aircraft by its characteristics surpasses the foreign analogues. Its reconnaissance capabilities will make it possible to detect new classes of targets, perform strike aircraft guidance and control,” Shoigu said.

According to him, the project is now at the stage of experimental design work codenamed Premier-476.

It was reported previously that the A-100 plane will be created on the basis of the new military transport aircraft Ilyushin Il-76MD-90A (also known as IL-476). Tests of the advanced AWACS plane are expected to begin in 2017.

Most specifications of the A-100 are classified. The AWACS aircraft is expected to feature a new Active Phased Array Radar (APAR) designed by ‘Vega’ corporation. It is said to be capable of detecting enemy aircraft at ranges of up to 600km (373 miles) and warships at ranges of around 400km (249 miles). The aircraft is also said to have advanced signal intelligence for greater independence and electronic warfare capabilities for protection. An A-100 reportedly may be used as a fully-fledged flying HQ for the military. Aircraft of this type are critical to ensure air superiority and improve situation awareness for military commanders in a dynamic combat environment. Long-range AWACS aircraft are operated by only a few countries, including Russia, the US, China and the UK.

The Beriyev A-100 Premier “flying radar,” able to detect enemy targets hundreds of kilometers away, will be flight-tested next March, Izvestia wrote citing a Defense Ministry source in Moscow.
The A-100 airborne early warning and control (AWACS) plane also uses onboard electronics to jam enemy radar and communications and this is where it differs from its US counterpart. “
The American AWACS’ radio-electronic warfare station used to hamper the work of its own radar and was subject to interference from its onboard surveillance stations, which is why they eventually gave up on them which made their AWACS less effective and more vulnerable too,” defense expert Alexei Leonkov told the newspaper.
America’s fifth generation F-22 Raptors can’t do without AWACS support. To stay invisible, they attack with their radar switched off, relying entirely on targeting data provided by the “flying eye,” that has to fly within 400 kilometers of the combat area. Having no means of electronic “camouflage” the “flying radar” may fall easy prey to enemy air defense weapons, above all Russia’s S-400’s long-range missiles.
By contrast, the A-100’s onboard defense system does not interfere with the work of its radar while, at the same time, making the plane impossible to lock on and track.
The A-100’s maiden flight to stress-test all its systems in the air is slated for March of next year. If everything goes well, the “flying radar” will become operational in 2018.
The plane is built around a multilateration radar unit featuring a pair of phased-array antennas capable of detecting enemy fighter planes at a distance of up to 600 kilometers and surface ships up to 400 kilometers away.
“The A-100 is a classified project, but I believe they may be using compact UHF elements working both as receivers and transmitters. This will notably increase the radar’s range and accuracy. All our interceptors and air defenders will need is fire their missiles and forget,” Leonkov added.
The A-100, already nicknamed “a flying mushroom” due to the distinctive rotating radar dome above the fuselage, is an upgrade of its A-50 predecessor that first flew in 1978 and entered service in 1984.