MOSCOW, November 6. /TASS/. Russia’s new T-14 Armata tank represents “the most revolutionary step change in tank design in the last half century,” says a leaked report of the British military intelligence obtained by The Sunday Telegraph newspaper in London.

“Without hyperbole, Armata represents the most revolutionary step change in tank design in the last half century,” writes the author of the document, whom the newspaper identifies as a senior Army intelligence officer.

A sample of T-14 Armata had the first public presentation at the May 9 military parade in Moscow in 2015 and its rollout there prompted the intelligence service to provide the report.

The document profiles the T-14’s as ‘pioneering’ thanks to a revolutionary unmanned turret that makes the crew less vulnerable to enemy fire.

In addition, the Armata has a gun with a higher muzzle velocity than that of the closest Wester analogues and is likely to be fitted out with an upgraded missile system, as well as a radar system installed at present on the overhauled Russian fighter jets.

“For the first time, a fully automated, digitised, unmanned turret has been incorporated into a main battle tank,” The Sunday Telegraph quotes the report. “And for the first time a tank crew is embedded within an armoured capsule in the hull front.”

“As a complete package, Armata certainly deserves its billing as the most revolutionary tank in a generation,” the report says.

The newspaper also quotes Brigadier Ben Barry, an expert on land warfare at the International Institute for Strategic Studies, “who said two features of the Armata would threaten NATO forces.”

“Firstly, it is the first tank designed with an unmanned turret,” he said. “This will potentially improve crew survivability.”

“The turret also looks to have the stretch potential to accommodate a larger-calibre gun of up to 150mm,” Barry said. “If fielded, this would overmatch the guns and armour on existing Nato tanks.”

“Secondly, it appears to be the first tank designed from the outset with an active protection system, to intercept incoming anti-tank guided missiles and shoulder-launched anti-tank weapons,” he said.

“This has the potential to greatly reduce the firepower of Nato infantry,” Barry said. “Of course, there are few Armata yet, and it is not clear how rapidly they will enter service. But as they do, they will increase the effectiveness of Russian armoured forces.”.

October 19 – Russia’s T-72 and T-90 main battle tanks will be capable of destroying enemy armored vehicles with a single shot after they are equipped with the Armata tank’s ‘electronic brain’, according to the Russian newspaper Izvestia.
The newspaper Izvestia quoted a Russian Defense Ministry source as saying that the Russian main battle tanks T-72 and T-90 will soon be equipped with the automat…ic target tracking system and computer unit used in the advanced Russian tank T-14 Armata; it will enable the T-72 and the T-90 to destroy enemy armored vehicles with the first shot.
“We plan start to test the modernized T-72 and T-90 in the next few years,” the source said, citing the current tests of the Armata tank’s automatic target tracking system. The source also pointed to the fact that all the three tanks are equipped with the same Kalina fire control system, which will simplify the process of installing the Armata tank’s electronic brain in the T-72 and the T-90.
Izvestia also quoted military expert Alexey Khlopotov as saying that the use of the automatic target tracking system and the computer unit will help to significantly increase the efficiency of military hardware on the battlefield.
“The main advantage of such systems is a complete exclusion of the human factor from the targeting process, which is especially important in stressful combat conditions. Each and every shot is on target; [the targeting system] becomes absolutely precise and is conducted much faster than when guided manually,” he said.
Earlier this year, it was reported that Russia is planning to modernize its 150 T-72 main battle tanks to the T-72B3M version. The upgraded vehicles will be comparable to the more advanced T-90, but with much lower costs.
Currently, there are 500 T-90A and T-90AM tanks in service with the Russian Armed Forces. However, the bulk of the Ground Forces rely on Soviet-era T-72 and its numerous modifications.
Experts said that in order to upgrade its ground forces, Russia will modernize its ageing main battle tanks while working on the newest T-14 Armata. Russia will spend 2.5 billion rubles ($37 million) to upgrade 150 T-72Bs to the advanced B3M standard, Izvestia quoted Uralvagonzavod deputy director Alexey Zharich as saying in March 2016. KUBINKA (Moscow Region), September 8. /TASS/. The combat capabilities of the new Russian tank Armata were for the first time shown during a closed exhibition at the international military-technical forum Army 2016, the general director of the manufacturer, Russian machine building company Uralvagonzavod, Oleg Siyenko, told TASS in an interview.

“We are also demonstrating our Armata, but now it poses not only as an exhibit but also shows its combat capabilities in dynamics and gunnery (during a closed viewing), which only happens for the first time at expositions,” Siyenko said.

He said the corporation presents 50 specimens of military and special hardware, including items made jointly with Russian and foreign companies.

In particular, Siyenko said, the exhibition showcased the Barys armored personnel carrier, manufactured jointly with Kazakhstan Engineering on the platform of the Paramount company, with a 57-millimeter weapon station produced by Uralvagonzavod.

“We have here a light armored personnel carrier with a 30-millimeter weapon station, manufactured jointly with Kamaz, which has already undergone tests. For the first time we are demonstrating a mortar on the basis of the UAZ vehicle, as well as a vehicle on the Ural chassis with a 120-millimeter gun,” he said.

Armata is a unified heavy platform used to build a main tank, an infantry combat vehicle, an armored personnel carrier and other armored vehicles. The tank on the basis of Armata is expected to get an unmanned turret. The crew will be placed in an isolated armored capsule. Serial production of the new tanks may start in 2018.

The tank was first shown to the general public at last year’s Victory Parade in Moscow.

Russia’s United Instrument Manufacturing Corporation (UIMC) said Wednesday that it plans to unveil its latest communication and control systems to be installed in future Russian Navy ships and submarines, as well as at its latest Russian armored vehicles, including the Armata tank, at the Army-2016 military expo.

In total, the company will present over 100 samples of military electronic products at the expo.

“Among the new products to be presented for the first time is the communication and control equipment for future warships, Navy submarines and new generation Russian armored vehicles — the Armata tank, the Kurganets-25 armored car, the Bumerang armored personnel carrier, the BTR-MD Rakushka and the Typhoon-K armored car,” the company’s press service said.

It was noted in the statement that visitors to the exhibition will also have a chance to see the Borisoglebsk 2 electronic warfare weapon system, as well as modern types of mobile command posts.

The International Military-Technical Forum Army-2016 will be held in Kubinka, a western suburb of Moscow, on September 6-11.

The next generation of armored vehicles based on the Armata and Kurganets tracked platforms will feature Russian-made sight matrices instead of French ones now, Gazeta.ru wrote citing Defense Ministry sources in Moscow.

The program of import substitution was launched in Russia in 2014 after Western nations stopped selling important parts and other equipment to Russia over its alleged involvement in the Ukrainian crisis.President Vladimir Putin then ordered the country’s defense industry to speed up the development and production of a number of vitally important “units and parts,” while still allowing them to look for alternative Western suppliers.

Shortly before the famous showcase of Russia’s top-of-the-line tanks and armored vehicles based on the Armata and Kurganets platforms during last year’s Victory Day Parade on Red Square, the deputy head of the Military-Industrial Commission, Oleg Bochkarev, said that they were 100-percent developed and built in Russia.

“We are already working on hardware components needed for mass production of [the next generation of tanks and armored vehicles],” he said early last year.

Gazeta.ru learned that by “hardware components” Bochkarev meant, among other things, thermal sights and motion control gear for Armata and Kurganets tanks and APCs.

Meanwhile, the Defense Ministry is closely monitoring the process of replacing US, European and Ukrainian-made parts in Russian defense production.

The Russian Defense Ministry unveiled its new Armata tank at the May 9 Victory Day military parade in Moscow in 2015.

The tank is operated by a crew of three, housed in an armored capsule at the front. Its main armament includes a 125-mm smoothbore cannon and a 7.62-mm remote-control machine gun.

Armata is a heavy tracked standardized platform serving as the basis for developing the main battle tank, an infantry fighting vehicle, an armored personnel carrier and some other armored vehicles 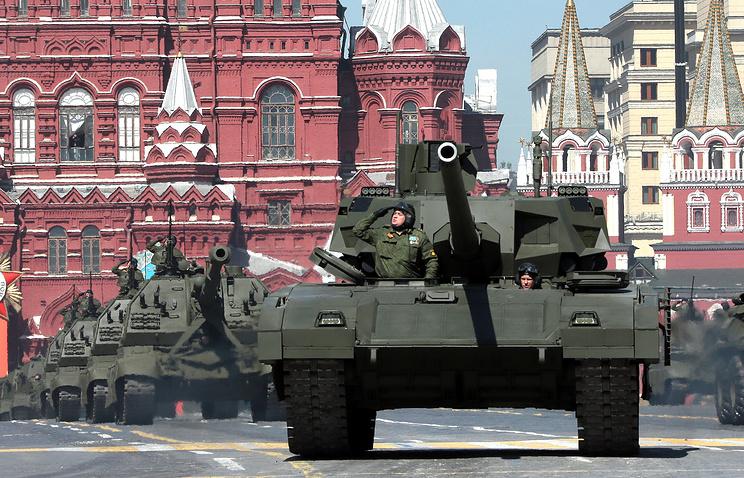 ST. PETERSBURG, June 16. /TASS/. Military hardware based on the Armata combat platform is the cheapest among analogs offered by European and US competitors, CEO of Uralvagonzavod armor manufacturer Oleg Siyenko said on Thursday.

“Unfortunately, I can’t specify it [the price]. This is not my secret; this is the secret of the Defense Ministry. The only thing I can say is that this is today the cheapest armored vehicle, fi we take our potential competitors in Europe and America,” the CEO said.

It was earlier reported that the price of tanks based on the Armata platform had been agreed with the Defense Ministry.

Armata is a heavy tracked standardized platform serving as the basis for developing the main battle tank, an infantry fighting vehicle, an armored personnel carrier and some other armored vehicles.

The Armata-based tank is expected to feature an inhabitable turret and its crew will sit in an isolated armored capsule. The serial production of new tanks may begin in 2018.

Apparently impressed by Russia’s all-new T-14 Armata tank, which was showcased during last year’s Victory Day parade in Moscow, many Western countries are looking for ways to upgrade, sometimes even radically, their existing tank fleets.

Britain’s BAE Systems has teamed up with several leading arms makers in a bid to extend the service life of the country’s 227 Challenger 2 main battle tanks.The effort will focus to improve the tank’s infrared imagers, the commander’s sight, the fire control system and onboard electronics, Pavel Aksenov wrote for BBC Russian Service.

Germany’s Krauss-Maffei Wegmann, the builder of the Leopard 2 tank, and France’s Nexter are mulling a joint venture to develop a new tank to replace the Leopard-2 and Leclerc tanks.

Not to be outdone, Italy is going to unveil the prototype of its new Centauro II wheeled tank at Eurosatory-2016 expo in Paris.

In January, Poland announced plans to modernize its 128 Leopard-2 tanks, and France said it would upgrade 200 Leclercs.

Domestic tank production programs exist in South Korea, Turkey and India, although these countries make extensive use of foreign-made armored vehicles, including Russian.Ukraine too now has plans to develop a tank all its own.

Many experts attribute most of these recent tank modernization programs to the regional armed conflicts in the Middle East and Ukraine.

Andrei Frolov, editor-in-chief of Arms Exports magazine, said that the regional conflicts of the past few years had changed the attitude towards tanks.

“During all these conflicts, from Syria and Yemen to Ukraine, tanks proved themselves as a formidable means of fire support. Despite some heavy losses, including from antitank missiles, I think it would be premature to say that tanks are now a thing of the past,” he said.

The emergence of the T-14 Armata tanks during the May 9, 2015 Victory Day parade on Red Square produces a very strong impression in military experts everywhere.

With its unmanned turret, the crew seated inside an armored capsule in the front of the hull and an electronic fire control and communications system, the Armata stands out from the classic tank designs of the post WWII-era.