January 06, 12:55 UTC+3
“Over the two months of their participation in combat operations, naval aviation pilots have carried out 420 sorties, including 117 in nighttime,” Commander of Russia’s Group of Forces in Syria said

“Over the two months of their participation in combat operations, naval aviation pilots have carried out 420 sorties, including 117 in nighttime. Actually all flights were performed in complex weather conditions. A total of 1,252 terrorist facilities have been destroyed,” he said.

“The strikes were delivered against infrastructure facilities, the amassments of militants and military hardware, fire emplacements and strongholds of illegal armed formations,” the commander said.

“The Black Sea Fleet’s frigate Admiral Grigorovich staying in the Mediterranean Sea delivered a missile strike on November 15, 2016 with Kalibr cruise missiles against facilities of the ISIL [the former name of the Islamic State terrorist organization outlawed in Russia] on the territory of Syria. All the targets were destroyed,” he said.

The missions of delivering strikes against ground facilities directly from aboard warships were accomplished by deck-based aircraft for the first time in the history of the Russian Navy, the commander said.

The tasks of Russia’s aircraft carrier naval group in Syria have been accomplished, Kartapolov said.

“The tasks assigned to the aircraft carrier naval task force have been accomplished,” the general said.

The aircraft carrier’s naval group’s warships and vessels are fully provided with all material supplies and are technically fit, he said.

“A unified air defense system has been created jointly with the resources and capabilities of the air defense system of the Russian grouping in Syria on the basis of modern S-300 and S-400 complexes to reliably protect facilities on the ground and at sea,” the commander said.

All types of defense, multi-service force interaction and comprehensive provision were practiced as Russia employed aircraft groups both from aboard the aircraft carrier and from the coastal aerodrome, he said.

The Admiral Kuznetsov aircraft carrier, currently en route to Syria, will hardly be involved in controlling airspace because there is already enough equipment on the ground, according to the Kremlin spokesman.

YUZHNO-SAKHALINSK – Russian aircraft carrier Admiral Kuznetsov is unlikely to be involved in exerting control over the skies over Syria, as there are enough instruments to defend government forces and Russian infrastructure, Kremlin spokesman Dmitry Peskov said Saturday.

“I do not think that it is necessary to keep somebody away, [or that] somebody can attack [the Syrian government forces] … as there are enough instruments to control the skies, to control the safety of our temporary infrastructure in Syria, which is why there is no such opportunity,” Peskov told “Vesti v Subbotu” TV show.

On October 15, Russia’s Northern Fleet’s press service said that a group of warships headed by the aircraft-carrying cruiser Admiral Kuznetsov accompanied by the Pyotr Veliky battle cruiser, the Severomorsk and Vice-Admiral Kulakov anti-submarine destroyer, and support vessels was sent to the Mediterranean to hold drills and strengthen capabilities.

NATO warships will escort a Russian aircraft carrier group on its tour to the Mediterranean Sea, a source in the alliance told RIA Novosti on condition of anonymity.

BRUSSELS — The naval group of Russia’s only aircraft carrier Admiral Kuznetsov set sail last Saturday for the eastern Mediterranean from the Northern Fleet’s home base of Severomorsk in northwestern Russia. Its expected passage through the English Channel put the Royal Navy on alert.

“Russia has the right to operate in international waters. The NATO Navy plans to observe Russian ships on their way to the Mediterranean,” the source said.

The Russian aircraft carrier is accompanied by the Pyotr Veliky battle cruiser, the Severomorsk and Vice-Admiral Kulakov anti-submarine destroyer, and support vessels. Their crews are expected to hold maritime drills to increase interoperability between the Navy and warplanes. 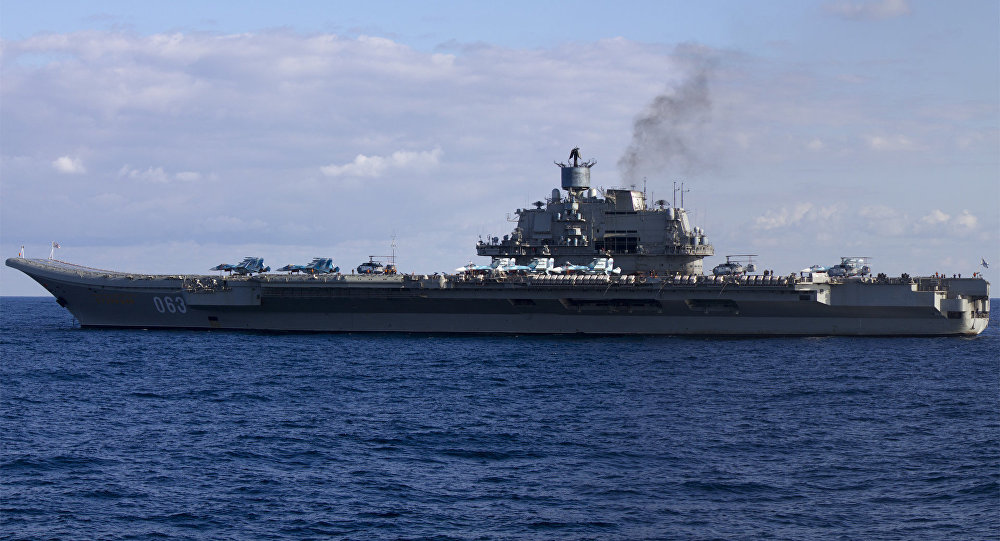 The Russian military detachment deployed to Syria to fight against Daesh (the terrorist group also known as ISIL/ISIS) may soon be bolstered by the Admiral Kuznetsov aircraft carrier.

The crew of Admiral Kuznetsov, Russia’s only aircraft-carrying cruiser, is preparing for a deployment to the shores of Syria. A source in the Defense Ministry told RIA Novosti that the carrier is currently undergoing repairs and will be ready for the long-range operation by the end of September.

“The carrier has arrived at the 35th dockyard to undergo a second stage of upgrades and to restore its technical readiness. All works are expected to be completed by the end of September when the ship will be ready for deployment,” the source said. 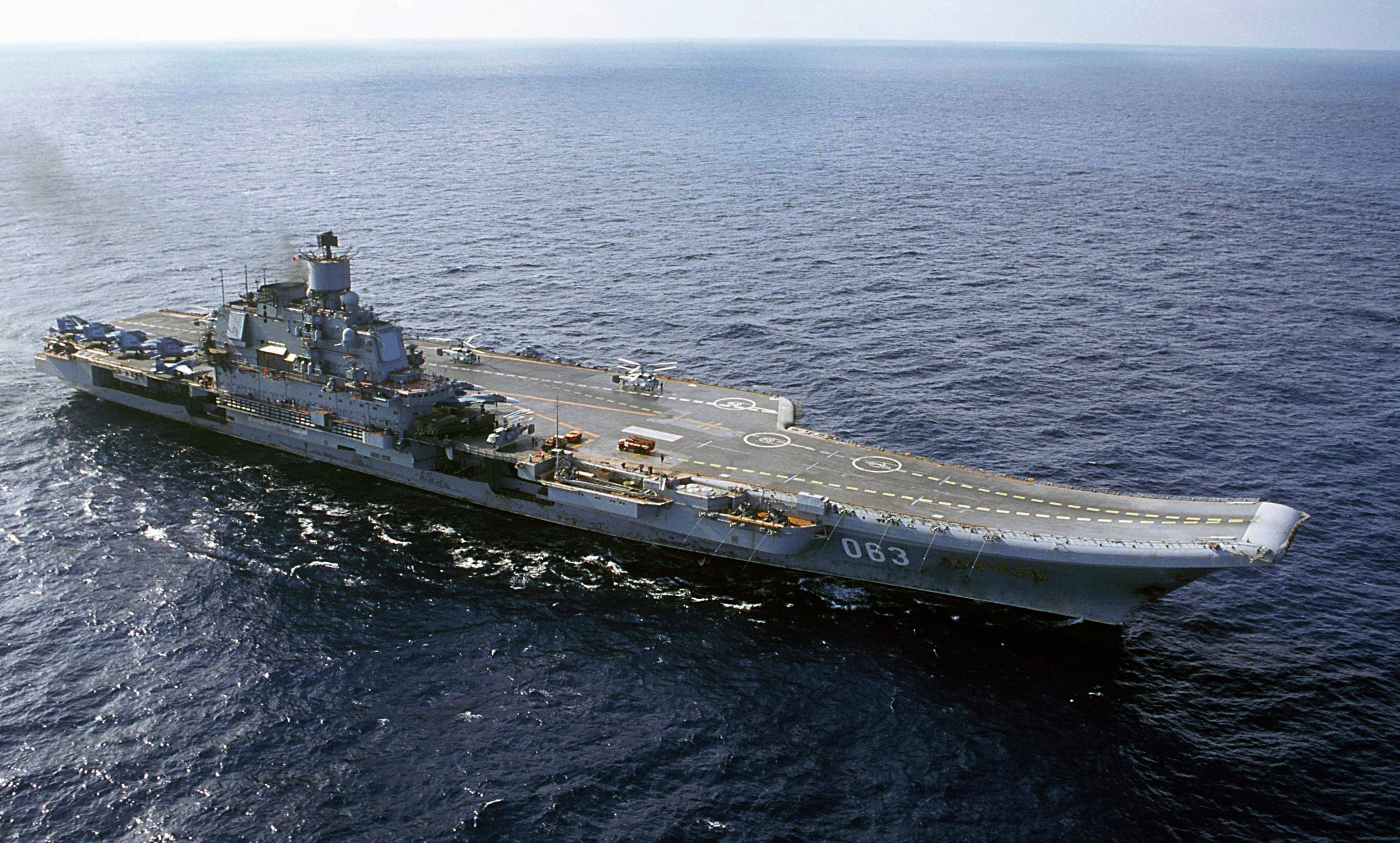 © AP Photo/ File
In this file photo from 2004, the Russian Navy’s Admiral Kuznetsov aircraft carrier is seen in the Barents Sea, Russia

Earlier in July Admiral Igor Kasatonov, former commander of Russia’s Black Sea Fleet, described the likely composition of a naval taskforce that may be deployed to Syria’s shores.

According to Kasatonov, it will be a carrier battle group, comprised of the carrier ship itself along with several escort ships and a multirole nuclear submarine. During the initial stages of the taskforce’s journey it will also likely be escorted by Il-38 and Tu-142 anti-submarine warfare aircraft.

Furthermore, the Admiral Kuznetsov may also be refitted in order to carry Ka-52K Katran reconnaissance and combat helicopters that were originally designed for operations aboard the French-built Mistral-class amphibious assault ships.

Ka-52K helicopters are equipped with precision-guided air-to-air and air-to-ground missiles, as well as with unguided rockets and an automatic cannon, and can be deployed in combat, target acquisition and designation, maritime patrol and convoy escort missions.

Russian aircraft carrier Admiral Kuznetsov, officially designated by the Russian Navy as a heavy aircraft-carrying missile cruiser, was built at the Black Sea Shipyard in 1985.