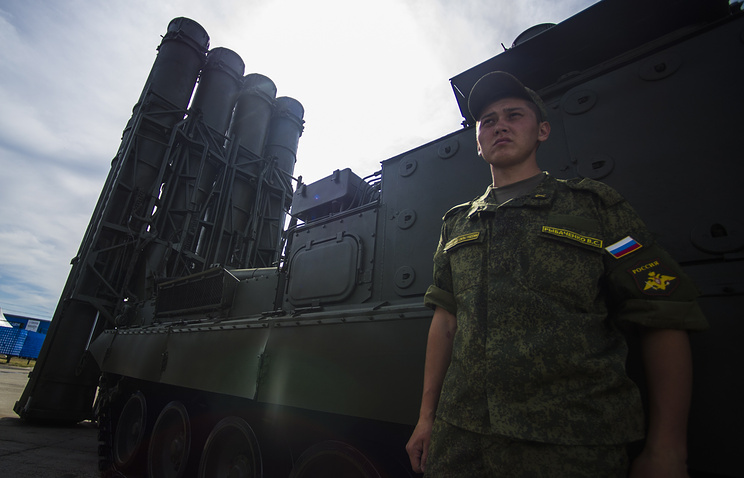 KUBINKA (Moscow region), September 9. /TASS/. The S-300V4 anti-aircraft missile defense system, which has been supplied to the Russian troops since the end of 2014, will be equipped with three types of hypersonic missiles, a representative of Russia’s air defense weapons’ manufacturer – Almaz-Antey Concern, told reporters on Friday at the Army 2016 Forum.

“The versatility of the S-300V4 system, according to the ‘efficiency – cost’ criterion, is achieved by using of three types of missiles – all SAM (surface-to-air missiles) in it – solid fuel, two-stage, hypersonic, maximally unified with each other”, he said.

The company spokesman said that the S-300V4 system will be able to use the 9M83M small missile, the large 9M82MD and intermediate 9M82M missile with the range of up to 200 km. According to him, the 9M82MD missile is designed to intercept aerodynamic targets within the range of 400 km, as well as the main types of ballistic targets, including the warheads of medium-range ballistic missiles flying at a speed of up to 4,500 meters per second

For the destruction of ballistic missile warheads, the air defense system missiles are for the first time equipped with a directional warhead with “light” and “heavy” strike elements, said the expert. The effectiveness of such a warhead is “more than five-fold or six-fold” higher than the “classic” one, the representative of Almaz-Antey said.

The contract on the supply of the S-300V4 system was signed with the Russian Defense Ministry in 2012, and the first set off the system was made operational in late 2014. In May, Almaz-Antey General Designer Pavel Sozinov said in an interview with TASS that a new long-range missile, which allows the system to destroy targets at a distance of 400 kilometers, was made operational.