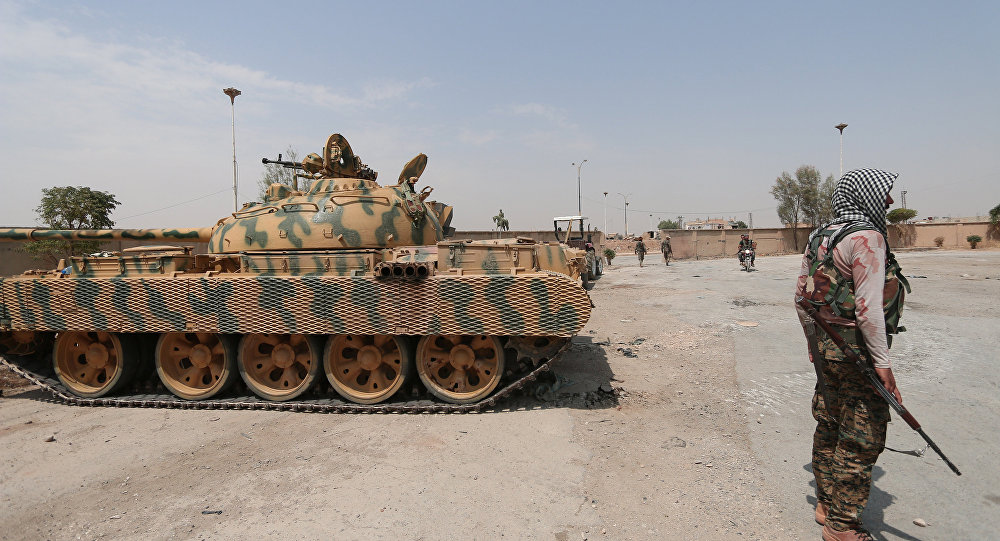 The US has pitted the Syrian Kurds against Damascus-led forces in the northeastern city of Hasakah in a bid not to lose regional influence should Turkey, Russia and Iran create an alliance to resolve the Syrian conflict, analyst and journalist Hüsnü Mahalli told Sputnik, adding that recent clashes are part of the West’s “geopolitical games.”

“Up until now Russia and Iran have helped to maintain cordial relations between the Syrian Kurds from the Democratic Union Party (PYD) and Damascus. The PYD made a mistake when it opted to cooperate with the US,” he said.

Kurdish militias, assisted by the US, have been trying to push radical groups, including Daesh and al-Nusra Front from northern Syria and secure the porous border with Turkey.  At the same time, the Kurds have established a de-facto autonomy in the areas under their control.Mahalli emphasized that any efforts on the part of the PYD and the People’s Protection Units (YPG) to create an independent state will be a mistake that could not be undone.

“The Americans have repeatedly said that they have a Plan B for Syria. Perhaps, this is what they meant. I’m afraid that the US has decided to drag the Kurds into a large-scale bloodbath,” he added.

The standoff in Hasakah was sparked last week when the Kurdish forces tried to take the entire city under control, violating the ceasefire regime. The Kurds are reported to have captured large parts of government-held areas in Hasaka on Tuesday. The same day the YPG and Damascus-led forces agreed to halt fighting. The ceasefire came into force at 11:00 GMT.

The political analyst maintained that these events are part of a larger US plan for the region. “If the West is serious about its large-scale geopolitical games – and judging from what is happening in Hasakah, it is – then the situation is disturbing,” he said.

The clashes between the Kurdish militias and the Syrian Arab Army (SAA) took place at a time when a major stakeholder, Turkey, made a U-turn in its foreign policy.Turkey recently improved relations with Russia and Iran. The two countries were swift in providing support to the Turkish authorities when a group of military officers tried to overthrow the government on July 15 despite the fact that they were on the opposing sides of the Syrian conflict. Ankara sponsored radical groups trying to overthrow President Bashar al-Assad, while Moscow and Tehran have tried to prevent Islamist from destroying the Arab country.

Turkish authorities are currently intent on repairing relations with Damascus.The regional balance of power, according to Mahalli, will alter even further if the three nations decide to join their efforts to bring an end to the five years of violence in Syria. This will lead to what the analyst described as Washington’s “inevitable weakening.”

Mahalli further said that Turkey has found itself in the hot water. On the one hand, approximately 15-20 million Kurds live in Turkey. On the other hand, Ankara has become the target of Islamist terrorism even though the country supported radical groups fighting in Syria.

“The only right choice Turkey could make is to admit its mistakes and act decisively to overcome the deadlock. The Turkish leadership needs to act decisively. Should it wait for the outcome of the presidential election in the US, the implications could be hard to predict. My main concern is that Turkey will ultimately be shattered,” he noted.