“During the joint training units of the Eastern Military District and the Mongolian armed forces practiced tactical groups’ movement on approach routes and the organization of communication between the units. The Joint Staff of the exercise command agreed the command and liaison signals common for both sides,” the official said.

The exercises started on August 30 and will last until September 7. The manoeuvers involve some 1,000 troops and up to 200 units of military equipment on both sides. In particular, the drills involve a tank battalion, a motorized infantry company, a mortar battalion, howitzer self-propelled artillery and rocket batteries, air defense, reconnaissance and NBC protection units of Russia’s Eastern Military District. The Mongolian Armed Forces are represented in the exercise by motorized infantry companies with infantry combat vehicles and armored personnel carriers, a tank platoon, a mortar and a rocket battery.

The Russian-Mongolian Selenga manoeuvers are held annually since 2008. Before 2011, it was a tactical exercise with live firing that was called Darkhan, which means “Builder” in Mongolian. Last year, the exercise was held in Russia’s Trans-Baikal Territory. Then the drills participants practiced assault river crossing and tactical landing. MOSCOW, August 31. /TASS/. One of the ringleaders and official speaker of the Islamic State terrorist organization (outlawed in Russia), Abu Muhammad al-Adnani has been liquidated in Syria’s Aleppo city as a result of an airstrike delivered by Russia’s Sukhoi Su-34 bomber, the press service of the Russian Defense Ministry reported on Wednesday.

“On August 30, 2016, Russia’s Su-34 bomber destroyed by an airstrike in the area of Ma’arat Umm Hawsh a large group of IS militants comprising up to 40 people. According to reports confirmed by several intelligence channels, field commander Abu Mukhammad al-Adnani, better known as “the official spokesperson” of the international terrorist group Islamic State, was among the liquidated terrorists,” the report says.

“Abu Muhammad al-Adnani was considered the second person in IS after the organization’s leader Abu Bakr al-Baghdadi and was known for his calls to stage terrorist attacks in countries of Western Europe and in the United States,” the ministry said.

The Pentagon said on August 30 that al-Adnani was liquidated by an airstrike of the US-led international coalition in the area of Al Bab. The US Department of Defense also reported that they were still assessing the results of the airstrike.

Today coalition forces conducted a precision strike near Al Bab, Syria, targeting Abu Muhammad Al-Adnani, one of ISIL’s most senior leaders. We are still assessing the results of the strike, but Al-Adnani’s removal from the battlefield would mark another significant blow to ISIL,” the Pentagon said in a statement on its website.

“Al-Adnani has served as principal architect of ISIL’s external operations and as ISIL’s chief spokesman. He has coordinated the movement of ISIL fighters, directly encouraged lone-wolf attacks on civilians and members of the military and actively recruited new ISIL members,” said the US Department of Defense. “The U.S. military will continue to prioritize and relentlessly target ISIL leaders and external plotters in order to defend our homeland, our allies and our partners, while we continue to gather momentum in destroying ISIL’s parent tumor in Iraq and Syria and combat its metastases around the world,” the statement says.

Earlier, Washington announced a reward of $5 million for information on the terrorist.

Within last 24 hours, truce agreements have been signed with representatives of 14 inhabited areas in the Homs (10) and Latakia (4) provinces.

The total number of inhabited areas, the leaders of which had signed reconciliation agreements, has reached 504.

Negotiations on joining ceasefire regime have been continued with field commanders of armed opposition detachments active in the Homs, Latakia, Hama, Al-Quneitra provinces.

The ceasefire has been observed in most provinces of the Syrian Arab Republic. Within last 24 hours, 8 ceasefire violations have been registered in the Damascus (6), and Latakia (2) provinces.

Jaysh al-Islam formations, which had claimed to belong to the opposition, have performed mortar shelling of Duma, Jaubar, Haush-Duarah, Arbil, Kabun and Harasta inhabited areas in the Damascus province.

In the Latakia province, militants of the Ahrar ash-Sham and the Free Syrian Army groupings have fired against positions of the units of the Syrian Armed Forces near Abu-Ali mountain and near the height “409”.

Groupings of Jabhat al-Nusra and ISIS international terrorist organizations do not stop making attempts to break the ceasefire regime.

Within last 24 hours, in the Aleppo city terrorists have fired with MLRS, antitank guided missiles, tank and IFV canons and artillery weapons against quarters: Khai-al-Ansari, Khai-al-Halidiyah, Leramon, Az-Zagra, the Air Force school, the tannery and the Kastello trade centre.

In the Daraa province, terrorists have fired against positions of the Syrian Armed Forces near mountain Tel-Antar and against the Al-Makhatta quarter in the Daraa city.

In the Hama province, terrorists have opened fire against the Tel-Salkhab settlement.

August 30 – India, with the help of Russia, plans to set up a logistics hub for its most lethal combat aircraft, the Su-30MKI, at the facilities of Hindustan Aeronautics Ltd (HAL) in Bangalore. Sources from India’s Ministry of Defense told, “we are trying to ensure the maximum operational availability of Su-30MKI fighters at any given time. We have improved the serviceability of the aircraft from 46% to… more than 60%. Notwithstanding, the Indian Air Force (IAF) has also finalized long term repair agreement with Russian original equipment manufacturers to improve the availability of aircraft for operational use but the long process of getting spare parts delivered is negatively impacting the operational availability of the aircraft….A spare parts logistics center will solve this problem.” Currently, it takes up to 18 months to deliver spare parts to India from Russia, mainly due to cumbersome bureaucratic process, customs, bank guarantees, etc. Air Marshal P. P. Khandekar, Air Officer-in-Charge for Maintenance at Air HQ IAF says, “For a small fleet, there is no need to set up infrastructure in the country. Our indigenous infrastructure development requirement is mainly for when the fleet is large.” Currently the Indian Air Force has more than 200 Su 30 MKI in its fleet and is expected to receive the remaining fleet by 2019. India contracted for the delivery of 272 Su 30 MKI with Russia.

August 30 – Moscow has decided to improve transparency on its military drills amid Western concerns over Russian surprise combat readiness checks, local media reported Tuesday. Moscow has decided to expand the scope of the information on military drills that it shares with its foreign partners to improve transparency amid Western concerns over Russian surprise combat readiness checks, local media reported T…uesday, citing the first deputy head of the defense committee of Russia’s upper house of parliament. According to the Izvestia newspaper, the new format of informing foreign military officials about Russian drills will include not only the basic information required under the Vienna Document ratified by Moscow in 2011, but also additional details. “Scheduled drills are not sufficient to maintain combat readiness, surprise checks… are also needed, but such inspections cause concern among our foreign partners, we understand that. Therefore, we have decided to make a gesture of good will — a decision was made to unilaterally inform [our] foreign partners when we conduct unscheduled exercises in more detail,” Franz Klintsevich was quoted as saying by the paper.
The new format includes holding special briefings for foreign military attaches, as well as providing them with data on the number of weapons and military equipment involved and information on the concepts behind specific exercises. “This is done to reduce tensions and increase the transparency of military activity,” Klinstevich added. The latest army combat readiness check kicked off on Thursday, provoking criticism from NATO officials. Deputy NATO chief Alexander Vershbow has called the surprise Russian Black Sea drills a matter of concern which do not contribute to developing trust between Russia and the Alliance. In June, NATO Secretary General Jens Stoltenberg claimed that Russia had been abusing the provisions of the Vienna Document to conduct major snap drills without notifying other signatories of the document. According to Stoltenberg, by doing so, Russia was undermining the transparency of military activity in Europe. 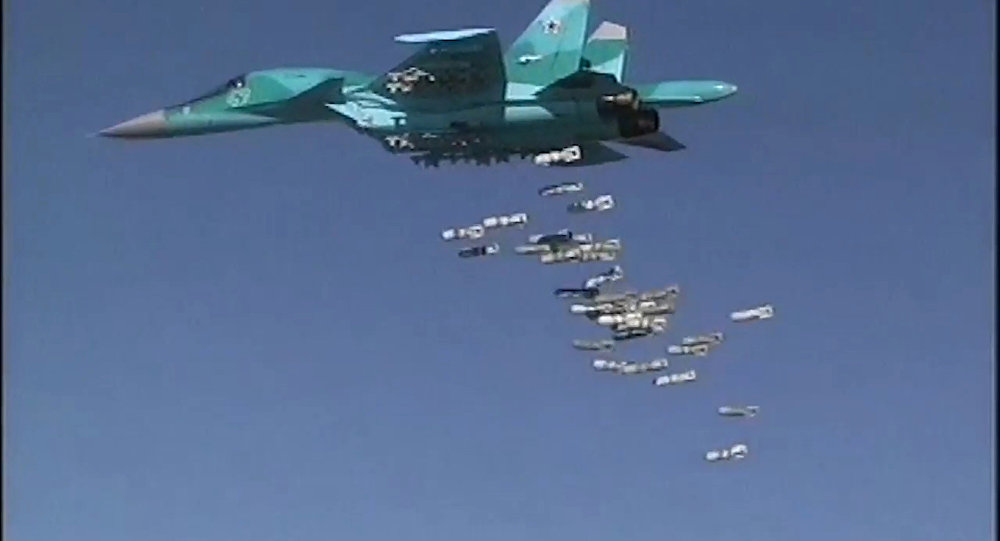 “On August 30, 2016, a mass gathering of Daesh fighters numbering up to 40 have been killed as a result of the Russian Su-34 bomber’s strike in the Maaratat-Umm Khaush area of Aleppo province,” the ministry said.

The Russian Defense Ministry confirmed that a second-in-command of the Daesh jihadist group has been killed in an airstrike in the Syrian province of Aleppo.

“Among the killed terrorists confirmed through multiple intelligence channels was Abu Mohammed al-Adnani, better known as ‘official media spokesman’ of the Islamic State international terrorist group,” the ministry said in a statement.

Syria has been mired in civil war since 2011, with government forces loyal to President Bashar Assad fighting numerous opposition factions and extremist groups.

Aleppo has been under siege by militant groups, including Jaish al-Islam, Ahrar ash-Sham and Jabhat Fatah al Sham, formerly known as al-Nusra Front, classified as terrorist organization in Russia. The city has seen intense fighting over the past few months, with the Syrian army and local militia forces managing to encircle large groups of militants in the eastern districts of the city.