February 29 – Antiterrorist exercises have been conducted at Russia’s Lyaur military range located on the outskirts of the Tajikistani capital Dushanbe, spokesman for the Russian Central Military District Nikolay Berkalov told on Monday.
“Reconnaissance teams of the 201st military base were involved in the simulated terrorist headquarters’ seek and destroy mission,” the official said. According to him, “the special o…peration was conducted simultaneously from two sides for the distraction of the terrorists’ attention.” Covered with massed intense fire from heavy-caliber machine guns of the BTR-80 armored personnel carriers, the reconnaissance crews got access to the terrorist facility and opened fire on the gunmen from the first floor. An assault team, using special climbing gear attacked and destroyed the enemy from the building’s roof.
The drills involved drones and automatic weapons with silencers. During the exercise the troops drilled counter-sabotage actions in unfamiliar mountainous terrain during the day and nighttime.
The 201st Russian military base was created in 2004 on the premises of the 201st division and numbers 6,000 officers and soldiers. It is the largest Russian military contingent abroad. The military units of the base are deployed in the Tajikistani capital of Dushanbe, the city of Kurgan-Tyube, southern Tajikistan, and Kulyab, eastern Tajikistan, where the Russian regiment was formed back in the 30s of the previous century. The term of deployment of the Russian military base in Tajikistan expired in 2014. In October 2012 the presidents of the two countries signed an agreement extending the term of deployment of the Russian military base in Tajikistan until 2042. 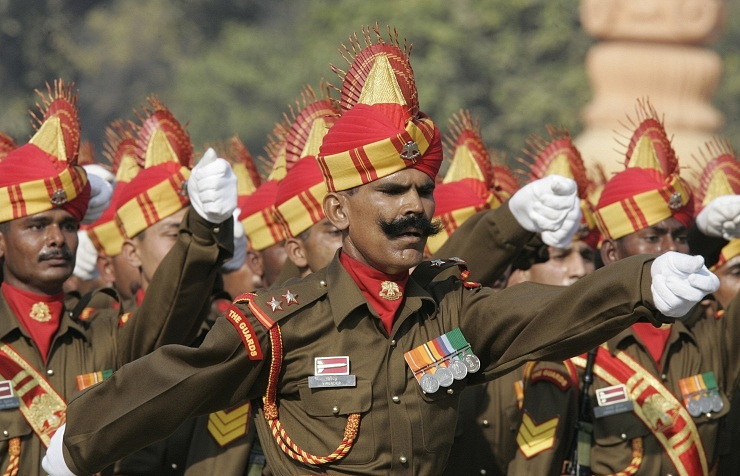 NEW DELHI, February 29. /TASS/. Russia continues to be the largest arms supplier to India with a total value of agreements exceeding 340 billion rupees (more than $5 billion) over the past three years, the Indian Defense Ministry said in a statement on Monday.

Russia also maintained its leading positions in the number of defense contracts signed with India within this period of time.

In India, a fiscal year begins on April 1 and ends on March 31.

Russia and Egyprt has reached great progress as a result of negotiatons on the delivery of radio and electronic equipment for the Mistral-class helicopter carriers obtained by the Egyptian Navy.

MOSCOW (Sputnik) – Serious progress has been made in talks between Russia and Egypt on the preparation and delivery of radio and electronic equipment for the Mistral-class helicopter carriers obtained by the Egyptian Navy after France canceled the deliveries to Moscow, a spokesman from Rostec’s United Instrument Manufacturing Corporation said Monday.

“Negotiations are continuing with Egypt on the delivery of radio-electronic equipment for the Mistral helicopter carriers. It’s already completely clear that the equipment stripped from the Mistral that was meant for the Russian Navy will not be delivered to Egypt…The possibility of preparing a different set of equipment especially for Egypt is currently under discussion,” the spokesman told journalists.

He said that it was premature to talk about the results of the negotiations, but said the Egyptian side “is showing great interest.”In October 2015, Cairo and Paris signed a contract paving the way for Egypt’s purchase of two Mistral helicopter carriers originally built for Russia, after France officially terminated the 1.2-billion-euro (some $1.28 billion at current exchange rates) deal with Moscow.

The Syrian Army may regroup and focus on fighting Daesh terrorists as the ceasefire is being observed by the opposing sides in Syria, according to Russian military expert Alexander Perendzhiyev.

In an interview with RIA Novosti, Russian military expert Alexander Perendzhiyev suggested that the ongoing ceasefire in Syria may prompt the country’s army to regroup and concentrate on a crackdown against Daesh.

“Regrouping the Syrian Army amid the ceasefire and the desire of some opposition forces to support President Bashar Assad in the fight against international terrorism may help Syria do away with  Daesh occupation,” Perendzhiev said.

However, he was somewhat skeptical about all the sides sticking to the 14-day ceasefire, which he said will become a litmus test for them.

In this vein, Perendzhiev did not rule out that the United States may accuse Russia and Syria of disrupting the peace process, a scenario that the said can be avoided if the Russian Defense Ministry is tasked with the comprehensive monitoring of the ceasefire regime.

“The Russian military and the diplomats will have to not only respond to possible information attacks but also deal with pre-emptive steps,” he said.

Perendzhiev expressed hope that the Russian Defense Ministry is already effectively monitoring the situation in the region and that if necessary, the ministry will present visual evidence of any provocation to the international community.

According to him, the monitoring should specifically be related to actions taken by Saudi Arabia and Turkey, which are “unwilling to retreat from the issue of President Assad’s ouster instead of focusing on the real fight against international terrorism.”

Russia and the United States reached an agreement on the ceasefire in Syria on February 22. The ceasefire took effect at midnight on Saturday Damascus time (22:00 GMT on Friday).

The UN Security Council unanimously adopted Resolution 2268 endorsing the Russia-US agreement on the cessation of hostilities in Syria on Friday, shortly before the ceasefire came into force.

The cessation of hostilities does not apply to designated terrorist organizations operating in Syria, including Daesh (ISIL/ISIS) and the Al-Nusra Front, a group affiliated with al-Qaeda.

The Russian Defense Ministry said, in turn, that “Russian aircraft aren’t performing strikes in those regions where a willingness to cease fire and to start negotiations were expressed.”Russia’s ongoing air campaign in Syria was launched on September 30, when more than fifty Russian warplanes, including Su-24M, Su-25 and Su-34 jets, commenced precision airstrikes on Daesh and Al-Nusra Front targets at the behest of Syrian President Bashar Assad. In addition, the Russian Defense Ministry confirmed earlier this month that advanced, super-maneuverable Su-35S multi-role fighters had begun their combat mission in Syria.

New Russian tanks sent to Syria have been able to survive hits from US-made TOW missiles, although their anti-missile counter-measures have yet to be seen in combat.

In a report on the new weapons deployed to the Syrian conflict, Robert Fisk drew attention to tank-based anti-missile systems, as well as night vision and reconnaissance systems.

The new tanks supplied to the Syrian army have the ability to deflect TOW-like missiles, although their full implementation has yet to be seen. A video released by rebels showed the T-90 surviving a hit by a TOW missile, but an open hatch prevented the deployment of an aerosol screen used to deflect such missiles before they reach the tank.

“Syrian officers have been shown how the new T-90 anti-missile system causes rockets to veer off course only yards from the tanks when fired directly at them,” Fisk wrote.

The video appears to be the manufacturer’s demonstration of the T-90’s Shtora system, mounted on a BMP-3. Images on social media have also shown what appears to be Arena-E radars mounted on Syrian equipment, although the radar by itself cannot deflect missiles without an aerosol screen and infrared beams which confuse the missile’s self-tracking.

When it comes to evidence of the system being used to save lives and equipment, video footage is less clear. A video from September 16 showed a TOW missile exploding prior to reaching its target.

The video has been criticized, however, as the flight time of the missile is over 22 seconds, which is the limit for TOW missile flight.

A more recent video showed the effect of a TOW-2A anti-tank guided missile on a T-90A tank, with the tandem warhead failing to penetrate the tank’s reactive armor.

The video cuts off before the aftermath of the explosion is seen, other than the gunner running out of the tank, apparently as a result of a concussion due to an open hatch.

The video also shows that the tank does not utilize the Shtora-1 system, perhaps automatically disabled due to the open hatch, as its infrared beams apparently remain unused, compared to the beams seen in the demonstration video. Operating tanks with the hatch open is a sort of conventional wisdom for operators of older tanks, as an open hatch allows for a faster escape from the tank.It has, however, shown the T-90A superior in guided missile protection, compared to the Abrams tank, one of which was destroyed by Yemen’s Houthi militias using the outdated 9K111 Fagot ATGM.

Russia’s ongoing airborne campaign in Syria wouldn’t have been such a game changer without the help of some of the country’s most sophisticated weapons.

The Sukhoi Su-34 strike fighter, adopted by the Russian Aerospace Forces in 2015, has been deployed against the radical Islamists in Syria from the beginning of Russia’s anti-Daesh campaign there. In 2016 the Russian aircraft contingent deployed at Hmeymim Airbase was further bolstered by four Sukhoi Su-35S super maneuverable multirole fighters. The impressive combat performance of these  aircraft has already attracted the attention of many prospective buyers from around the globe.

In October 2015 the world became suddenly aware that Russia possesses sophisticated long-range cruise missiles. The message was spread by the country’s Caspian Flotilla in the most no-nonsense, matter-of-fact way possible, as its warships successfully obliterated a number of Daesh targets in Syria by launching Kalibr-NK missiles from hundreds of miles away. While many of this new cruise missile’s parameters still remain classified, apparently it has an effective range of 350 kilometers when deployed against naval targets and can hit assets on the ground from a distance of up to 2,600 kilometers.

The Tupolev Tu-160 supersonic strategic bomber, known as the ‘White Swan’ in Russia and as ‘Blackjack’ abroad, is usually considered a deterrent, a nuclear weapon delivery system capable of crossing a distance of up to 14,000 kilometers without refueling. In Syria, however, these bombers wiped out numerous Daesh targets using conventional ordnance, such as KAB-500 guided bombs, Kh-29L laser-guided missiles and Kh-101 air-launched cruise missiles.

The TOS-1A Solntsepyok (‘Blazing Sun’) multiple rocket launcher has also proved to be an effective weapon in the Syrian conflict. Its thermobaric projectiles are especially effective in mountain areas as their blast waves resonate and are boosted in confined environments – an unwelcome surprise for Daesh militants who sought to use elevated positions in the mountains to their advantage or to take cover in ruined buildings.

And last but not least, there are BTR-82A1 armored personnel carriers – an invaluable tool for every infantry assault operation. The vehicle’s 30mm autocannon with a coaxial 7.62mm machinegun virtually tears apart concrete structures while its digital targeting systems ensure that the crew’s vision won’t be impaired by nighttime, leaving the militants almost no place to hide.

MOSCOW (Sputnik) — The militants attacked the positions of the army near the town of Salamiyah, Syria’s government forces killed 35 Daesh fighters in the armed clashes, the SANA news service reported on Saturday, citing a military source.The news service added that the militants lost several off-road vehicles with machine guns, as well as cannons and mortars.

Syria has been mired in civil war since 2011, with forces loyal to President Bashar Assad fighting against a number of opposition factions and extremist groups, including Daesh and the Nusra Front, which are prohibited in many countries, including Russia.

On Monday, Russia and the United States reached an agreement on the ceasefire in Syria. The ceasefire, which excludes both Daesh and the Nusra Front took effect at midnight on Saturday Damascus time (22:00 GMT on Friday).