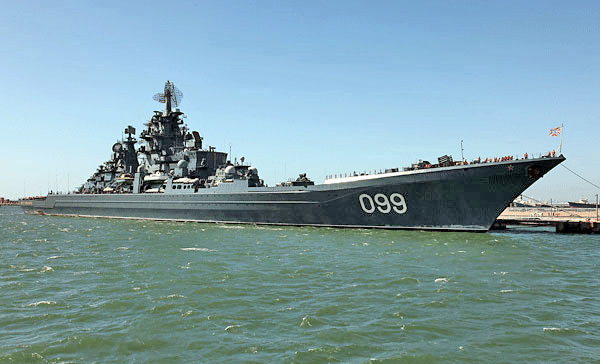 MURMANSK, April 29. (ARMS-TASS). In the Northern Fleet on April 28 honored the crew of the heavy nuclear-powered missile cruiser “Peter the Great”. The flagship of one of the associations of the Russian Navy is 15 years old.

Designed for the destruction of important surface targets, attacks on shore targets with the use of sea-launched cruise missiles, providing air and missile defense compounds ships. The ship is the latest improved version of Project 1144 (new air defense systems and some systems REV).

In the armed cruiser are SCRC “Granit” c 20 RCC. Air defenses: 2 multi-channel SAM Collective (zone) defense, “Fort”, “Fort-M” and 1 SAM self-defense “dagger”, 6 combat units SPAR “Dirk”. Firepower ship complemented by 130-mm AK-130. The ships are equipped with radar complex MR-800 radar in the MP-600 and MP-750, GAK and MG-355 fully loaded (with towed antenna).
Experts estimate that the total cost of the USSR and Russia for the construction of this ship have exceeded $ 1.2 billion.